Man Gets Bitten by Shark for $100 Bet 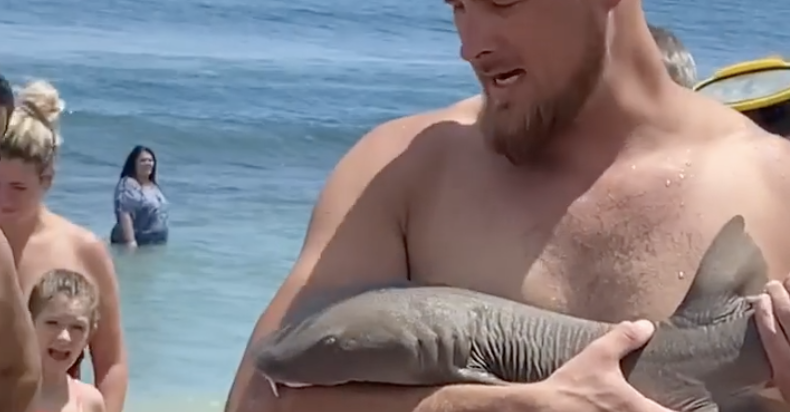 A Florida man is $100 richer — not including any potential medical bills — after he won a bet with a friend over whether or not he was brave enough to mess with a shark the pair saw swimming near Jensen Beach, Florida.

The man was indeed brave enough. Unfortunately for him, the shark was also pretty brave and not at all in the mood to be poked at and messed with. So the shark decided to latch onto the guy’s arm. Ultimately the Martin County Fire Department had to respond to the incident. The aftermath of the shark vs. man interaction was caught on video and posted to Facebook.

All, please know, this shark did not go after this guy. This guy grabbed the shark and the shark bite him. Hopefully lesson learned for this guy.

Fortunately for the man the shark’s bite wasn’t too painful. He told onlookers that the shark’s mouth felt like sandpaper. Regardless, he needed some help to get the thing off his arm. Eventually first responders were able to get the shark loose by pouring alcohol on its face.

The shark, fortunately, was still alive and released back into the ocean where, hopefully, no other Florida men and women will gleefully poke at it for the lawlz.

1. This could be a full-time job in Florida. Like a pool hustler but instead you bet tourists that you can get a shark to bite you. This seems like a viable form of income. Shark bite hustler.

2. I want to talk crap on this guy but I can’t say I wouldn’t do the same thing on four hours of sleep, seventeen Coronas deep for the fourth day in a row, delirious from dehydration, and well on my way to a sunstroke, which is how I assume pretty much everyone down to mess with a shark is on every Florida beach.

Watch: Woman Killed by Wild Alligator While Trying to Pet It