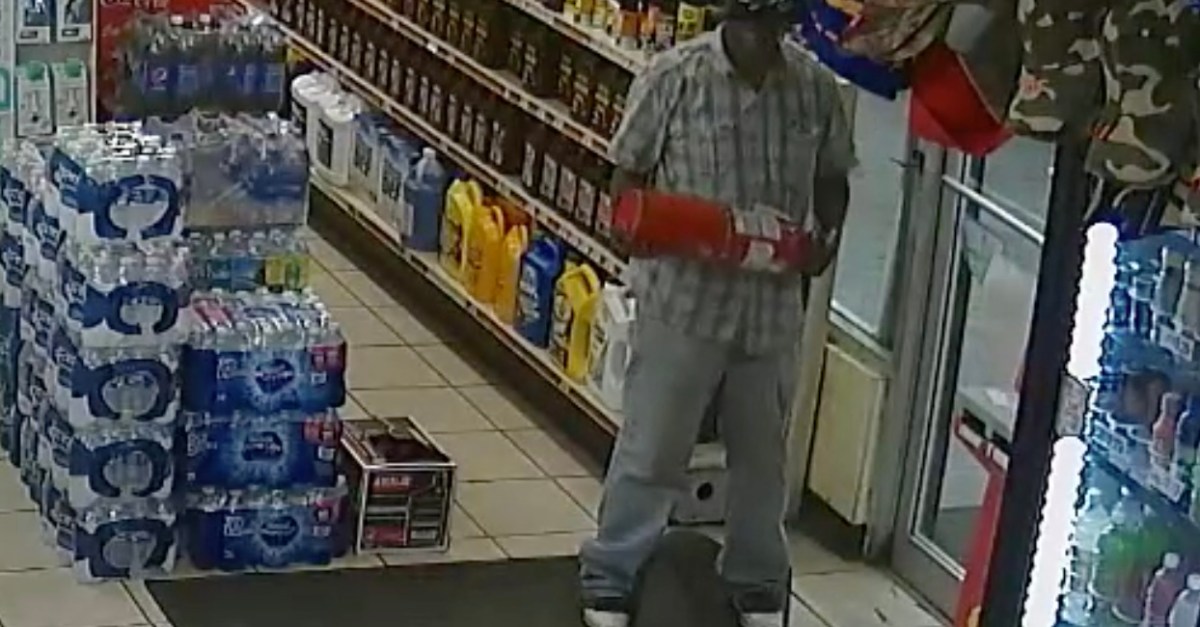 A Florida man who was not really in the mood to pay a dollar for a bottle of Pepsi attempted to walk out of a Citgo gas station convenience store with said bottle of cola but not before informing the gas station cashier of what he was doing. (Without manners we’re no better than animals, after all.)

Much to 49-year-old Melbourne, Florida resident Gabriel Tillman’s surprise and chagrin, however, the cashier was not on board with his plan and hit the automatic lock on the gas station market’s door before Tillman could leave. An incredulous Tillman, furious that his gentleman’s agreement had been rejected, tried his hardest to escape the store anyway, pushing and hitting the door before eventually trying to shatter the glass door with a fire extinguisher. He had informed the cashier of his intent to take the soda, after all. He was no longer liable for his actions. But there was a locked door standing between him and free soda anyway, and his attempts to escape were all caught on camera.

(Note: the audio is fake but the video is real.)

The Polk County Sheriff’s Office provided the following information with the video.

49-year-old Gabriel from Mulberry wanted a Pepsi. When you see the video, you will see just how badly he wanted that Pepsi.

Gabriel walked into the Citgo convenience store at 4075 Hwy 60 in Mulberry on Thursday, December 12th and picked up a refreshing bottle of Pepsi Cola…then tried to walk right back out without paying for said Pepsi.

The store cashier saw what Gabriel was doing and quickly pushed the lock button on the door, effectively preventing Gabriel from absconding with his not-paid-for beverage.

Not wanting anything else to be damaged, the cashier unlocked the door and Gabriel walked away, making sure to take his stolen Pepsi with him.

A deputy spotted Gabriel about two blocks away from the store, enjoying his stolen effervescent Pepsi.

The deputy asked Gabriel if he knew what was going on, to which Gabriel replied, “Possibly.”

Gabriel was arrested and taken to the Polk Pokey. The report did not say if he was allowed to finish his Pepsi.

The video you are about to see is real…the audio, not so much.

Sometimes you have such a bad day the world won’t even let you enjoy a Pepsi. Sad.

Watch: Elderly Florida Couple Arrested for Sex on Sidewalk in Front of 12-year-old