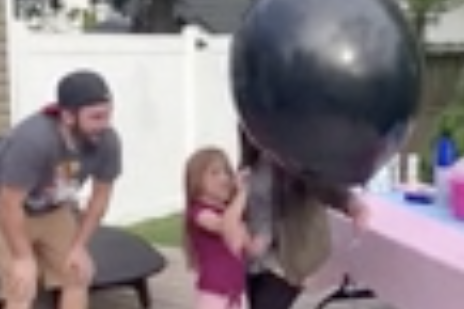 Gender Reveal Fail We Can All Enjoy

Why can we all enjoy it? Mostly because at least they didn’t start a wildfire or something. This is a harmless and hilarious fail. Perfectly made for social media. The whole fail is pretty straightforward too. The couple was going to let their baby girl pop the gender reveal balloon with a dart. The little girl tried and failed so the mom took the dart away. Then, the little girl threw a fit about not getting to pop the balloon so the mom gave the dart back to her.

Then things went wrong and a viral video was born. The little girl, still upset about being snubbed or the dart not working the first time, took the dart and threw it as hard as she could toward the gender reveal onlookers and other family members. The mother, who was holding the balloon, immediately turned to her daughter to yell at her for throwing a dart at other people. But, in her anger, she let go of the balloon, which had the gender of the baby inside.

Then the balloon floated upward, never to be seen again. A gender reveal ruined. Now they’ll never be able to elaborately reveal if they’re having a little girl or little boy. Sad!

Now they’re resigned to posting whether they had a baby girl or baby boy on Facebook. Like peasants. The moment is ruined. The child will forever be tainted. A disappointment before it was even born. Tragic.

Watch: This Naughty Gingerbread Man Talks Dirty and Wants You to “Eat Him”