People are Having Groomers Bedazzle Their Dogs’ Testicles with Glitter 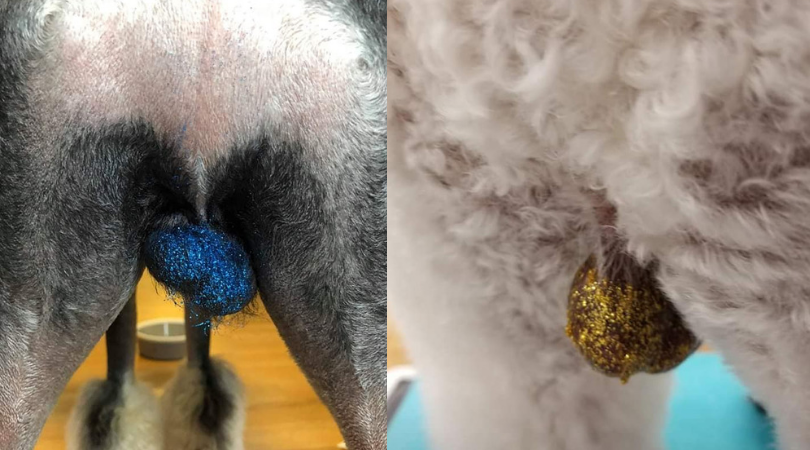 Beloved American prize wizard Bob Barker used to give us a daily reminder to spay and neuter our pets but, if this latest trend hits the mainstream, we should probably just start sterilizing all humans. A glittered dog scrotum. That’s where we’re at as a society. We’re so far up Maslow’s pyramid that we’re not even dipping our own nutsacks in glitter. We’ve moved on to our dogs. How far removed from the threat of starving to death to do you have to be to pay to have someone do this? This is the type of thing that’s so unnecessarily extravagant that when the working class sees it they start getting an urge to cut off the heads of the rich.

We, as a species, need a new predator. We’ve been at the top of the food chain for too long. Somebody hurry up and invent, then piss off, artificial intelligence. Humans have become the animal kingdom equivalent of a foppish, ridiculously bewigged French noble whose diet is mostly foie gras and whose hobbies include pretending to be poor and… decorating his poodle’s balls. There’s actually absolutely nothing more foppish and French than glittering a poodle’s balls.

The “trend” first hit wide public awareness after being shared on the Royal Paws Pet Salon Facebook page. The North Carolina pet salon, however, is not a purveyor of sparkling dog balls. They posted the pictures for entertainment purposes only and assured their customers that they would absolutely not be partaking in testicular bedazzlement.

Some people have called the scrotal decoration animal cruelty but you can at least be satisfied in knowing that the only thing being hurt is these dogs’ pride. The glitter, which is edible, is applied to the dog scrotums with corn syrup (so, sugar). It’s not dangerous for the dogs, who’ve licked far worse things than their own balls and sugar.

Is this really how we’re repaying dogs for being the best?

Watch: Slobbery Smooches: Why Does My Dog Love to Lick Me?