Fake Note Illustrates What Businesses Really Think When They Close 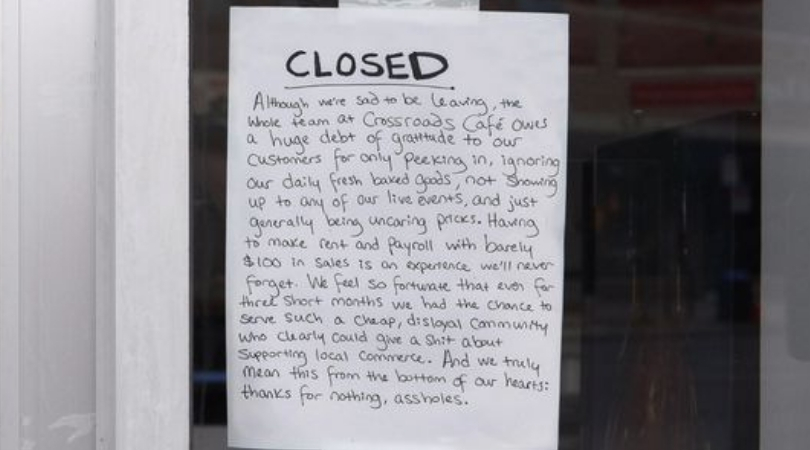 The Onion
The Onion

Editors Note: The note mentioned in this article was originally found on The Onion. We understand the note is fake, but we decided to chip in our two cents since we found it hilarious.

Yikes, it looks like this coffee shop was not playing around when they decided to bash their whole neighborhood. Why you ask? Because they wouldn’t visit enough for them to keep the light on. Shutting their doors after an impossible 12 weeks in the business, a local coffee shop, called Crossroads Cafe, decided to go out with a bang by writing a harsh and terrifying going out of business sign.

The cafe “quickly blamed” and thanked the residents for their lack of support. The alleged note read, ?Although we?re sad to be leaving, the whole team at Crossroads Café owes a huge debt of gratitude to our customers for only peeking in, ignoring our daily fresh baked goods, not showing up to any of our live events, and just generally being uncaring pricks.?

What made this even more hilarious was a fact that this note was handwritten, meaning they wanted it to hit to the core. I’m sure the ink ran out after the person who wrote it finished it because it is tough to intake. These owners were not playing around and wanted everyone in the town to know it. I mean, I get it, local business is hard. New customers usually prefer to go to well-known places or retail stores instead of local shops, but you can’t blame them for everything. One has to come up with a way to intrigue their community at all costs.

Still, there was a note displayed in the window of the now-defunct small business storefronts. The custom sign (which we know didn’t happen. *cough, cough*) hilariously continued, ?Having to make rent and payroll with barely $100 in sales is an experience we?ll never forget. We feel so fortunate that even for three short months we had the chance to serve such a cheap, disloyal community who clearly could give a shit about supporting local commerce. And we truly mean this from the bottom of our hearts: Thanks for nothing, assholes.?

Like I said, harsh. This is a true definition of passive-aggressiveness, and I am all for it. You’re mad, I get it, let it out, sweetie. But you might want to start thinking about what you could have done better to help yourself in that situation. At the end of the day, it does go both ways. If your business closes, then you have to understand that there are several factors, not just customers. Please don’t go out and blame other people. Also, be a nice human and don’t ever leave notes like this one lying around. I know it’s fake, thankfully, but this is devastating.