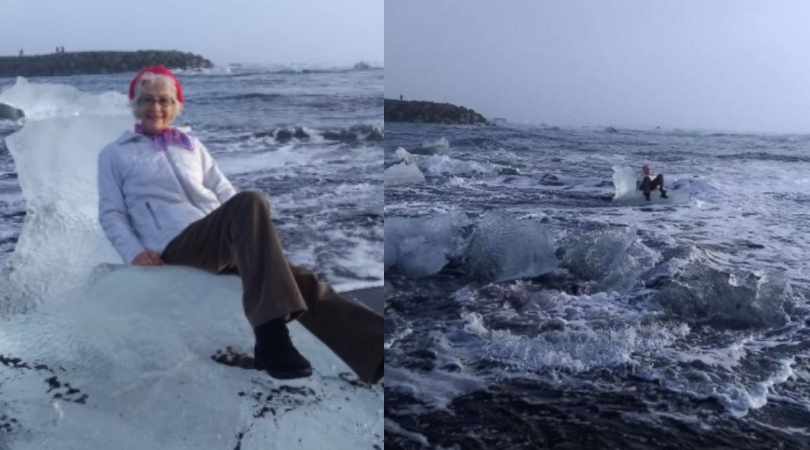 It was definitely an adventurous day for Judith Streng, who while touring Iceland was literally swept away by the sea! Streng was sitting atop a largely shaped fragment of ice at Diamond Beach posing for a photo when all of the sudden a big wave came crashing onto her. And luckily for us, but unlucky for her of course, it was all captured through pictures!

The grandmother was posing for her son, Rod Streng after they both thought the ice in the Jokulsarlon Lake resembled a throne. Without knowing, a large wave came in and she began to slip off, eventually taking a tumble in the sea. Luckily, Randy Lacount, a licensed boat captain from Noida saw the whole thing and quickly went in to help the grandmother. Streng, who is now being dubbed ‘The Iceberg Queen’, returned to shore unfazed from her, let’s call it “short-lived” hilarious ice journey.

My grandmother almost got lost at sea in Iceland today lmaoooo pic.twitter.com/osHrwTEkyr

As expected, the photos quickly went viral once her 24-year-old granddaughter Catherine Streng posted the hilarious texts messages and pictures she received from her father on Twitter. One of the photos shows the grandmother sitting on a chunk of ice shaped like a lounge chair. Another image shows the grandmother sitting on the iceberg and floating away into the Iceland waters. Finding the bright side of the situation, the 77-year-old didn’t take the incident too seriously and definitely had a chuckle out of it. Because well, it happened, so why not embrace it.

“[The iceberg] was shaped like an easy place to sit, you can tell by looking at the shape of it. And I thought ‘Well that looks like fun,’” Streng said, “But when I got on, it started to totter and a wave was coming in, a very large wave came in and made the throne rock and I could tell I was slipping off I don’t weigh very much so, it was a little easier to float off with me I guess.”

Catherine definitely needs to show these pictures to the Game of Throne writers and producers and get her grandmother on the show asap. Maybe make a whole spin-off of it? She’s the White Walker queen hands down! Give her the Iceberg throne!