Florida Surfer Dude Gets Bit By a Shark, Opts for Bar Instead of Hospital 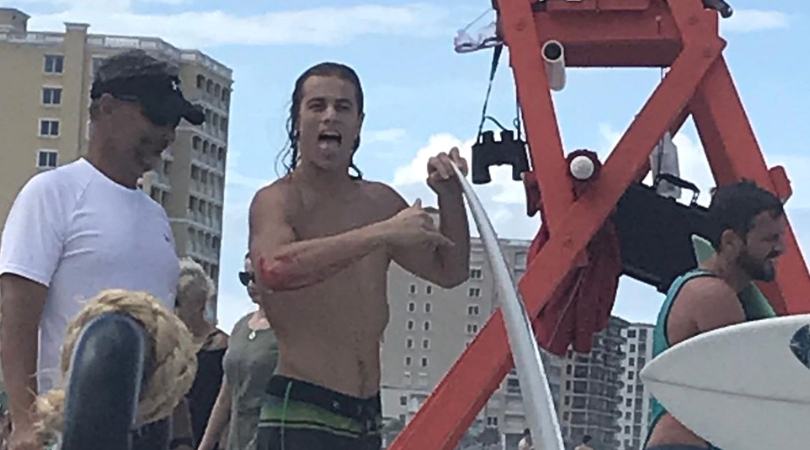 You know how sometimes doctors say that when you’re in a wild trippy accident you probably won’t feel how badly you’re hurt because your adrenaline is really really high? Heck, it’s happened to me before. When I was 15 I broke my leg to the point that my bone was about to pop out and didn’t even feel anything until I was out of surgery. So, I’m gonna go ahead and guess that this is exactly what happened here.

Basically, a professional surfer from Florida was attacked by a shark while surfing at Jacksonville Beach. Yes, a shark. But, after the surfer was bitten, he decided not to go to the hospital, rather go drink it off and laugh about it at a bar. Yup, this man almost died because he got bit by a freaking shark, but all he wanted to do was drink some White Claws with his buddies instead. Because well, you have to celebrate that you’re alive, right?

23-year-old Frank O’Rourke said that the shark jumped out of the water and grabbed onto his arm right below his elbow. He joked, “Kinda tugs a little bit and thrushes. I guess it tasted me and was like, ?Nope.’? His friend, RJ Berger, was with him at the time and said the shark fully came out of the water and splashed everywhere with his tale. Berger said O’Rourke kept repeating that he thought he got bit and once they both got to the beach, he started bleeding everywhere and saw his surfboard was full of blood.

O’Rourke was quickly treated by lifeguards and then ran to the bar because he wanted to tell people he got bit by a shark and was still alive, hoping people would buy him drinks. Which seems totally reasonable, really. Such a dude move. Despite the scare, O’Rourke said he still plans on surfing after his wound has healed, because well, after a decade of surfing I’m sure this man has seen worse. A shark bite isn’t a really big deal.

Editors Note: This article was originally published on July 29, 2019.

Watch: The Best Way to Remove a Fish Hook