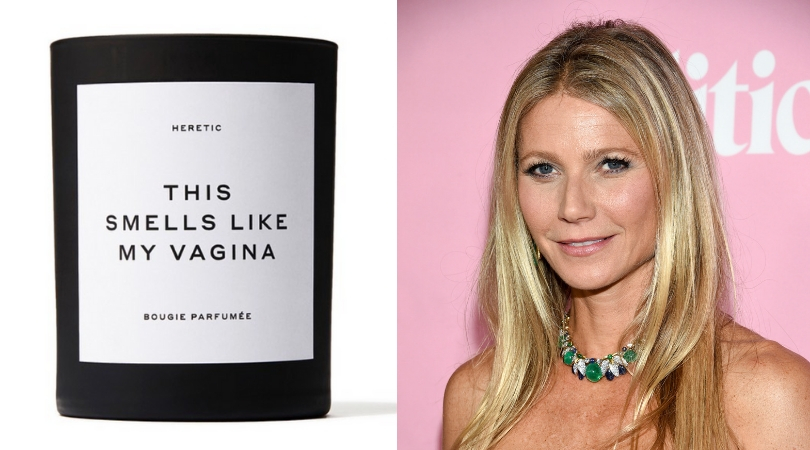 What in the world is going on with these Hollywood celebrities? First, we had Orlando Bloom confess to keeping his dead dog’s penis and turning it into an ornament. Now, we have Gwyneth Paltrow, who just released a candle that smells like her vagina. Yes, her vagina. I am so so confused and have so many questions.

The 47-year-old actress and lifestyle entrepreneur found another way to shock the whole world by selling a vagina scented candle in her online lifestyle brand Goop store. The candle, which is called “This Smells Like My Vagina,” is currently being sold for $75 and is said to be packed with geranium, citrusy bergamot and cedar absolutes juxtaposed with Damask rose and ambrette seed. Because apparently, this is exactly what vaginas smell like.

The scent is described as “funny, gorgeous, sexy, and beautifully unexpected” that puts us in mind of fantasy, seduction, and a “sophisticated warmth.” The idea apparently came from Heretic, and originally started out as a joke. The product description reads, ?This candle started as a joke between perfumer Douglas Little and GP — the two were working on a fragrance, and she blurted out, ?Uhhh … this smells like a vagina? — but evolved into a funny, gorgeous, sexy, and beautifully unexpected scent.?

As expected, the candle quickly sold out on both Heretic’s and Goop’s website, because of course, it did. But you can put yourself on the waitlist if you’re really curious as to how Gwyneth Paltrow’s vagina smells like. I can’t wait for Amazon to sell a knockoff version of it.

Gwyneth Paltrow and goop say her vagina smells like "geranium, citrusy bergamot, and cedar absolutes juxtaposed with Damask rose and ambrette seed that puts us in mind of fantasy, seduction, and a sophisticated warmth." Anyone want to send me one?

Now, back to the vagina candle. I really don’t know how I feel about this. One because I really doubt this candle actually smells like Paltrow’s Vagina, so it’s questionable. Two, hygiene man, this is just wrong. Who was the person in charge of smelling Paltrow’s vagina in the first place?

Can you imagine that meeting at the Goop lab, just having someone down there trying to get the scent perfect? Talk about an awkward situation.  Also, the response to this hilarious but gross candle went viral on social media, because of course, and I haven’t been able to stop laughing at all these tweets for a good 15 minutes. I love people.

If we really want to end all those candle light vigils for dead terrorists we should supply all of those vigils with Gwyneth Paltrow's candles. https://t.co/1NulPgULv7

Brad Pitt: WHAT’S IN THE BOX?

Gwyneth Paltrow: (hands him one of her candles) Sniff this.

Watch: ?Shittens?: The Mittens We Never Asked For But Definitely Want Because Poop Is Gross