Debate Over! This is How You REALLY Pronounce ‘GIF’ 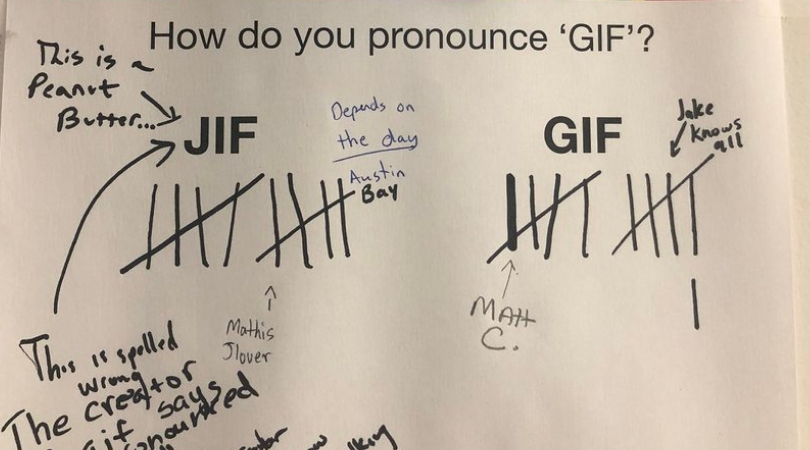 It’s the question of the month, the year, the century, the day, you name it! It’s been one of the most asked questions since it became “a thing,” and honestly, it’s pretty easy to see why. What am I talking about? Nothing other than the pronunciation of “GIF.”

A Graphics Interchange Format, most commonly known as a GIF, is a lossless format for image files that support both static and animated images. People usually use these images to either respond to a comment in a funny way or explain a situation showing emotion. Since the creation of the GIF, there has been an enormous debate as to how the heck it is pronounced. To date, it has been pronounced two ways: with a hard G, like in gift, and a soft G, like the peanut butter brand, “JIF”. But, how exactly is it pronounced, and how do we know that’s how it’s supposed to be pronounced?

Looks like I only need to buy birthday GGGGifts for half of the @realDailyWire office. pic.twitter.com/Hh1Lr6HDaA

Fear not, I am here with your correct answer! Obviously, the most natural and logical way to pronounce it is with a hard G. I mean, it’s a habit for all of us who speak English. Every word that starts with G, then followed by a vowel, then an F is pronounced with a hard G. For example: guff, guffaw, gift, and gaffe. See? Hard G.

Most one-syllable words that start with a G have a hard G: Gad, Gal, Gone, Gore, Get, Gill, Gimp, Gun, Guy. I can go on and on an on. The word “Gift” is the closest word to Gif and has a hard G. So naturally, to pronounce GIF, just say “gift” without the “t”. Right?

Yes, to make things more complicated for humanity, the creator of GIF image formats, Steve Wilhite of CompuServe, deliberately chose to echo the American peanut butter brand, JIF, to ultimately play tricks on everyone. Yup, the jokester admitted that he would have never pronounced GIF with a soft G if the peanut butter company never existed. Wilhite explained why he chose to pronounce the word “JIF”, saying it goes against how one would naturally pronounce it.

Why should we listen to him? Well, Wilhite did create the file format in 1987 when he was working for CompuServe, the first major online service in the nation. The company originally wanted to display color weather maps. During his time with the company, he explored graphics and created the first image (which was a picture of an airplane) and then the rest became history. Today, GIFs are commonly used for short animation on the internet…so…yeah. We’re listening to him.

Safe to say after his big reveal, the internet went crazy, not accepting the ridiculous statement. Several weighed in on Twitter to remind the country that Obama administration had already ruled on the subject explaining the administration’s Tumblr strategy and highlighting GIF’s, noting it was, in fact, a hard G pronunciation. But obviously, they were wrong. Nice try Obama, nice try!

So what does this mean for us?

Honestly, nothing. Why? Because it’s plain stupid, that’s why! Who cares if you call it “GIF” or “JIF”, feel free to pronounce it with a hard G because you have every right to do so! If you decide to go with a soft G, then congratulation, go ahead and say it with enough confidence to prove you are absolutely 100% right. If you go with the hard G, then congratulation to you too, because you and 75% of the world also say it like that. Just don’t be too harsh on those who say “JIF” because ultimately, they’re the right ones here. Sorry.

So there you have it, debate over.