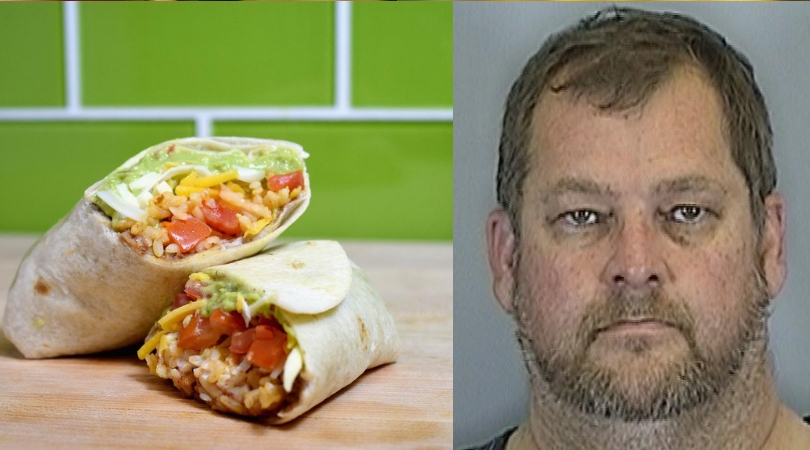 Marriage is hard, we all know that. The fighting, the yelling, the constant bickering, it’s just messy. But, you know what’s even messier? Throwing Taco Bell burritos everywhere! Yes, what is up with people and their obsession with throwing Taco Bell food everywhere? I get it, their tacos and burritos are so lightweight that you can throw it with no problem across the room, but launching them at a person? You better think twice!

Turns out this dynamic duo tried to solve an argument the only way they could: by going to Taco Bell for lunch. But, according to authorities, the married couple’s argument turned into an all-out food fight, and well, Taco Bell wasn’t too happy about it! The couple, from Florida of course, were arguing about their son. 49-year-old Victor Fosser, the father, had told his son he needed to move out of their home as soon as possible. Why? No idea, but his wife wasn’t too happy about it. So, like any man would he decided to taunt her about it by dangling a burrito in front of her face and made fun of her for being upset.

His wife, 49-year-old Pamela Ellen Fosser, who wasn’t too amused with her husband, grabbed the burrito and threw it behind her on the floor. Surprised by the flying burrito, the husband then picked up all the remains from the floor and smashed them right into her face, “causing some to go up into her nose.” Yes, marriage at it’s finest, ladies and gents!

More power to you. #PowerMenuBurrito

Unfortunately, it turns out Taco Bell wasn’t too fond of the people ruining their burrito creation, so they called the cops. Fosser was immediately arrested and charged with battery…for smashing a burrito in his wife’s face. The horror, the shame! Try explaining that next time you want to get a job.

Interviewer: It says here you were arrested for battery?

Husband: Oh, yeah, um…my wife and I had an argument at Taco Bell. You see, our son had just moved out and she was sad, so she threw a burrito out of my hand when I was waving it in front of her. So, you know, I grabbed it from the floor and smashed some beans on her face.

Interviewer: Oh, dang. What a waste of a burrito. You’re hired!

The wife, who I presume was taunting him even more after his arrest, told authorities that she loved her husband despite him being a burrito thrower. The couple has been married for 2 and a half years and is in counseling “because they do not know how to argue like a married couple.” Yup, that explains it.

I don’t know, it sounds like this couple has something going for them. Keep doing what you’re doing, Fosser’s. Give this couple free Taco Bell for life!

This article was originally published on January 30, 2019.