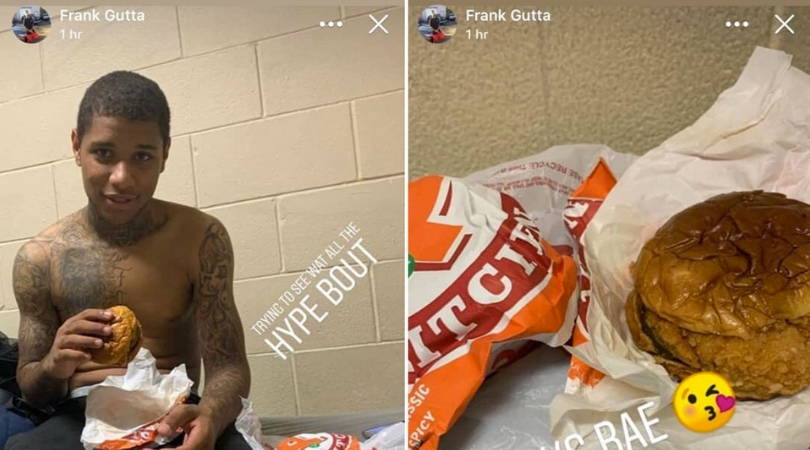 What in the world is going on? These inmate stories are getting way too out of hand. Turns out an inmate recently posted pictures of himself eating a freaking Popeyes chicken sandwich. Yes, not only did this man managed to get his hands on the sandwich that is making people stab each other while waiting in long lines, but he had the audacity to post it on his Instagram. No shame whatsoever!

According to Fox News, Frank Gutta posted the photo to his Instagram which later made its rounds to Twitter. One picture shows the prisoner in his jail cell getting ready to eat America’s latest food craze with the caption, ?trying to see what all the hype bout.? Gutta then posted another photo reading, ?Thanks Bae? with a closer image of his prison cot.

Niggas in jail ate the Popeyes chicken sandwich before me IM SICK pic.twitter.com/9TbrE0DO0W

Now, in case you don’t know what Bae is, it’s a nickname for baby. Meaning yes, someone from the outside smuggled this sandwich in a place that police couldn’t see it. So if that doesn’t gross you out, I don’t know what will. Well, either that or this inmate is dating someone from inside the jail and they managed to get it for him, but I’m going to go with the first option.

You know what, no, I don’t even want to know how it got in there in the first place. Because this Popeyes sandwich wasn’t just a sandwich itself, it had the full-on rapper still on there and it was inside the bag.

How tf has someone in jail tried the PopEyes sandwich before me?

Safe to say the images quickly went viral on social media after Twitter Use,  Eugene3005, posted it on his timeline. It quickly generated a lot of comments and retweets, with users pretty much asking the same questions over and over again.

I mean, yeah sure, I’m glad this man is getting to enjoy something that’s making our nation a bit crazy. But if someone can smuggle a chicken sandwich into prison, it kind of makes you wonder what else they can smuggle.

I don’t even wanna know how they snuck that in pic.twitter.com/CqpMbrDsTI

Oh yeah, and let’s not forget the cell phone that he managed to take a picture on and upload it to his social media pages. This just keeps getting even more insane. Is this a new thing? Can you have phones in jail now? What did I miss? I don’t know, it seems to me like that prison needs to tighten their security just a little bit.