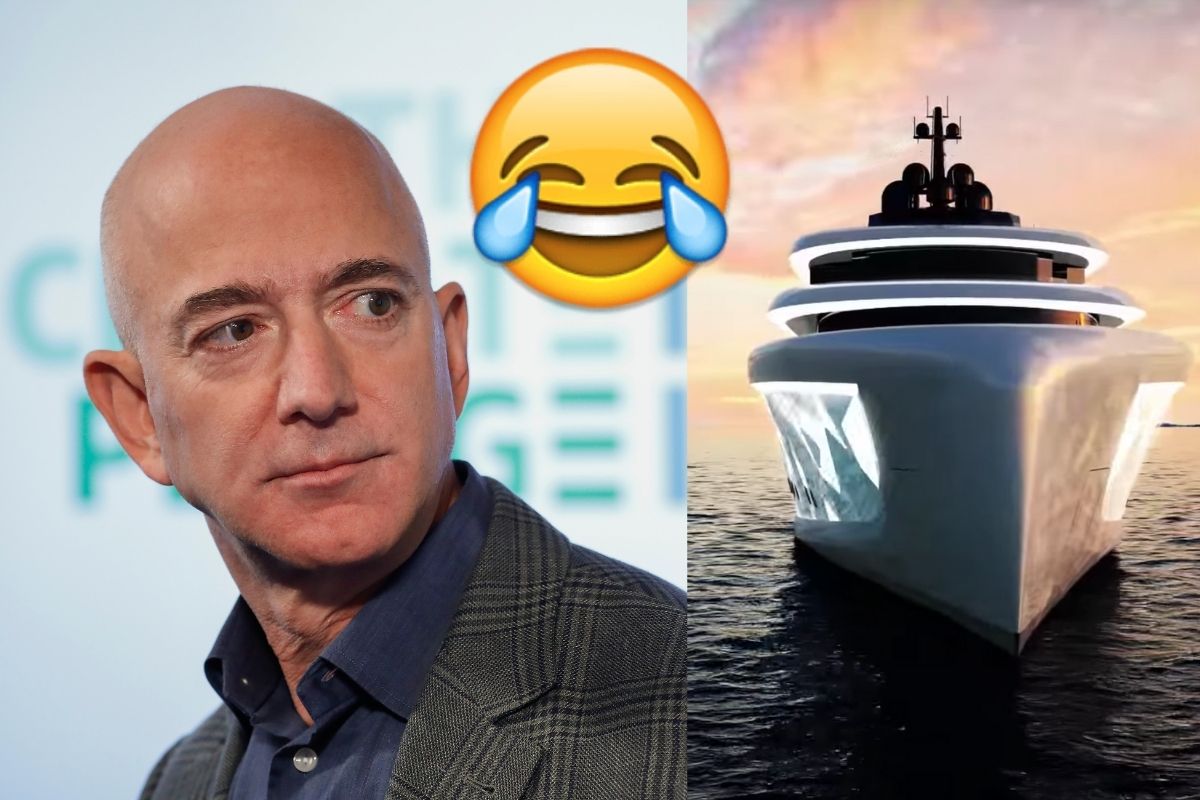 Former Amazon CEO Jeff Bezos is the world’s richest man. So is it really any surprise that he’s buying something called a “superyacht”? The massive 417-foot boat even has its own support yacht — whatever that means — equipped with a helipad. Unsurprisingly, the billionaire‘s ostentatious purchase has been getting roasted on social media and made for some late-night comedy fodder.

Jeff Bezos’ fancy-schmancy yacht is under development with the Dutch boatbuilding company Oceanco and is being called “Project Y721.” Could it sound any more super-villainous? The enormous, triple-masted schooner will become the world’s largest sailing superyacht upon completion; construction in the Netherlands is set to be finished next month. Previously, Oceanco built the Black Pearl, a famed 350-foot-long yacht, see below.

The special sailing yacht comes with a price tag of $500 million — not including the so-called support yacht. Of course, that’s chump change for billionaire Bezos who made an additional $75 billion over the last year alone. In fact, throughout the coronavirus pandemic, the super-rich only got super-rich-er. U.S. billionaires collectively gained $1.1 trillion during 2020, increasing their net worth 40% since the pandemic began. Bezos is now worth $191 billion. Tesla CEO Elon Musk, the #2 richest man in the world, has $166 billion.

Sam Tucker, the head of yacht research at VesselsValue, spoke to Bloomberg recently about the booming superyacht industry: ?The market?s been roaring. It?s impossible to get a slot in a new-build yard. They?re totally booked.” Demand for this nearly unimaginable luxury is now higher than supply; check out the stats for yourself.

There are 23 #yachts currently in build longer than 100m, showing the immense growth in the #superyacht market. The @JeffBezos yacht is estimated at around 127m long. The largest yacht currently in build is reported as 146m long.#JeffBezos #wealth #investment #vessels #Amazon pic.twitter.com/VmWuPgPTA2

On The Late Show with Stephen Colbert this week, the talk show host put Jeff Bezos on blast over his new superyacht. Watch the hilarious clip above.

And Jimmy Kimmel Too

?The founder of Amazon is reportedly building a $500 million superyacht that is so big, it requires a ?support yacht? to travel with it. This is like the billionaire version of having a second fridge in your garage.? ? Jimmy Kimmel

Jeff Bezos has gotten over $70 billion richer since the pandemic started. He just bought a “super yacht” that’s longer than the Statue of Liberty is tall. It is time for a #WealthTax in America.https://t.co/A5bDD3U9xy

It's an emotional support yacht.https://t.co/uaIiKNkKl5

His superyacht is SO big that it has its own "support yacht" with a helipad? I’m not even sure what all of that means!

This story + that photo of Bezos = Lex Luthor’s superyacht in “Superman Returns” pic.twitter.com/oq9kfBO0JX

**Breaking** Leaked footage of Bezos' $500m superyacht and its support yacht for his helicopter pic.twitter.com/veZh29hTxv

And Finally, a Relatable One:

The tension between me wanting a package of merchandise delivered to my house everyday and me not wanting to contribute to jeff bezos' superyacht pic.twitter.com/D74yV5NtXc