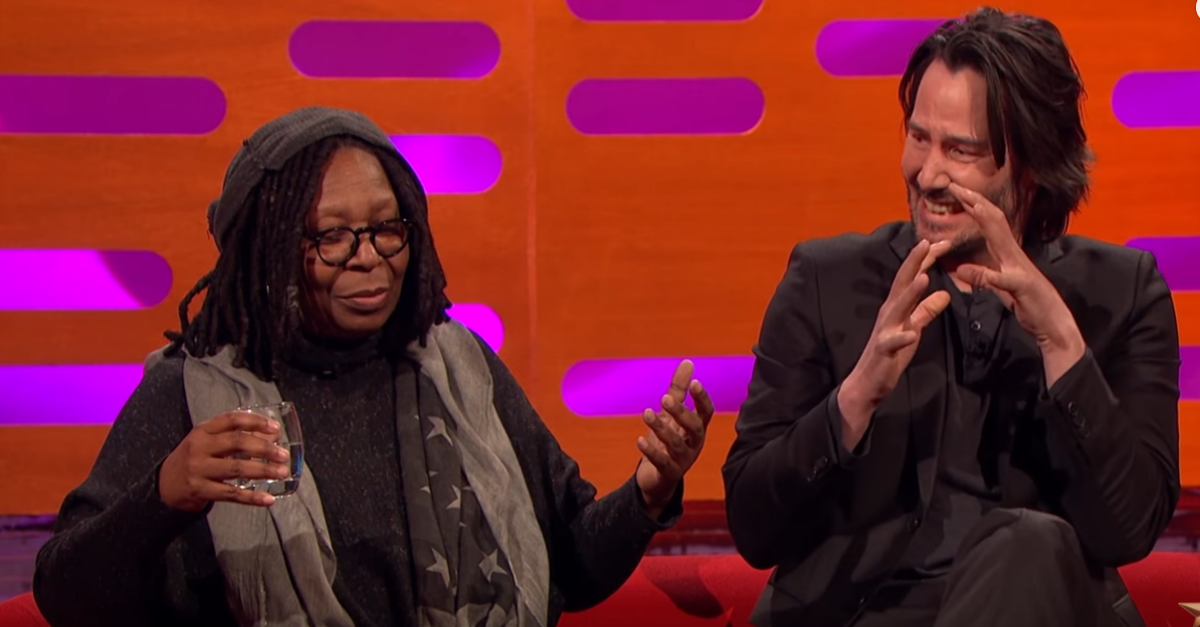 While Keanu Reeves was doing the talk show circuit to promote his film, “John Wick,” the Matrix star and talk show host Whoopi Goldberg both appeared on “The Graham Norton Show.” Goldberg explained that she wasn’t expecting all the things that happen when a woman gets older, specifically the “balding pudenda.”

Reeves made a face that seemed to suggest that he (like most men) isn’t familiar with the “balding pudenda.” As Goldberg began to explain, he joked, “Oh wait, do I want to know what this is?” She explained, “Once where there was an afro that I could put beads on and braid, there is now Paul Shaffer’s head.” Keanu looked feebly down at the floor and tried to comprehend what he’d just heard.

All Whoop Goldberg was trying to explain, was that the balding pudenda is essentially a loss of pubic hair for women. Whoopi Goldberg freaks out Keanu Reeves with her pubic hair talk, and no one can stop giggling. She had started out commenting on becoming aware of her old age by explaining her experience at a recent Steely Dan concert. She said that everyone around was old, and she even shocked herself by seeing herself in the mirror, making her realize she wasn’t young anymore.

Well, at least we know that old age dosen’t affect how funny you are. Whoopi Goldberg is now 64-years-old, and she was probably sharing advice for what 55-year-old Keanu Reeves can expect as he isn’t exactly the youngest thing either. Goldberg continued on to alarm Reeves by explaining that there are things that happen to men too when they get older, but they would have to check out her show to find out.

With how funny she is, I don’t think I would mind Whoopi Goldberg explaining to me what old age is like. It makes getting older less terrifying.

Editor’s note: This article was originally posted on December 7, 2018.