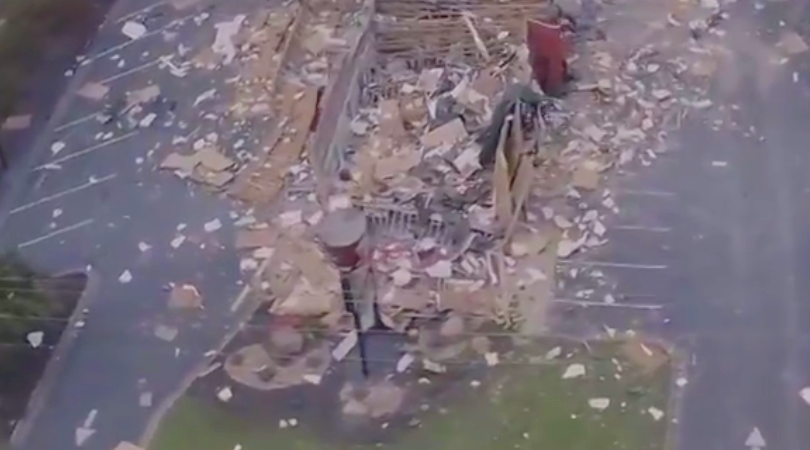 This is what happens when someone breaks in and tries to steal the Colonel’s secret recipe of herbs and spices. A lone employee sitting in the panic room beneath every KFC — an employee who, every night before beginning their panic room shift, has made peace with the fact that this night may be the final night of their lives — hits the self-destruct button, sending the recipe, themselves, and the bastards trying to steal the recipe straight to hell.

Fried chicken isn’t a damn joke. But, okay, that might not be what happened here. It’s also possible that this explosion of this Eden, North Carolina KFC was caused because a KFC worker had stayed late to finish cleaning up and, after being constipated for weeks and having eaten nothing but KFC in that time, he was finally able to fully release, and what we saw on the video was the result of that. Regardless, this footage of the KFC exploding is insane. It straight up explodes.

🚨 REDUCED TO RUBBLE: The KFC in Eden, N.C. exploded overnight after employees reported smelling gas. Fortunately, no one was hurt. https://t.co/EMoca3p8o0 pic.twitter.com/BVmVPO9tqj

In truth, no one was actually hurt in the explosion. It happened at night, while the store was closed. Authorities also don’t know what happened but suspect some sort of gas-related explosion. Either that or a KFC franchise owner was trying to get some insurance money and instead of committing arson they used a crate of dynamite.

The explosion was so powerful that it damaged other businesses around it, knocking out windows and rattling walls. Several businesses in Eden have to make repairs in the coming days because of the KFC explosion. Businesses that were still open in the area caught customers’ reactions to the explosions on their security cameras.

Honestly, not as scared as you’d assume after being shaken by a monstrous explosion.

Watch: I Tried KFC’s Chicken & Waffles and Here’s My Thoughts