This Couple Had a KFC-Themed Wedding with Personalized Chicken Buckets 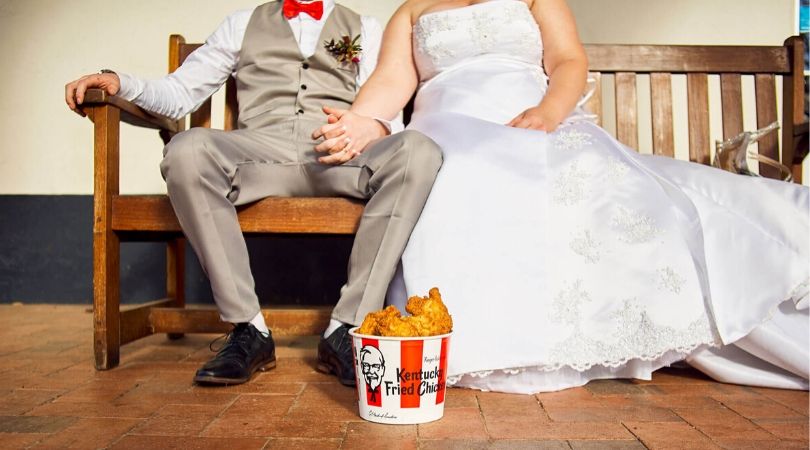 Listen, no one, and I mean NO ONE, likes KFC as much as this beautiful couple! An Australian couple has broken the record and became the first couple in the world to have an official KFC-themed wedding! Okay maybe not the first in the world, but definitely the first in Australia. Because well, why not? If you love fried chicken so much, why not celebrate it with your friends and family? Kate and Harrison Cann from Toowoomba, Queensland not only surprised all of their 150 guests with yummy chicken, but their whole wedding decor was dedicated to the fast-food chain as well. Yes, it was as if Kentucky threw up in there.

Why? Well, the newlyweds were the winners of the first-ever KFC official wedding service, KFCproposal, that was announced in September 2019. They had everything from finger-lickin’ good cake to KFC buckets, photo booths, a Colonel-style singer and a KFC food truck for hungry guests. Because we all know that it isn’t a wedding without a good ol’ food truck. (Looking at you Waffle House!) What made the event even more special is that the couple’s friends and family didn’t even know it was their wedding! They were basically blindsided and told it was just a regular chicken party.

Of course Australia’s first “KFC Wedding” was in #Toowoomba 🍗🍟…Super Rooster should have broken into this market already 👰🏻🤵🏻 details @WINNews_TWBA 6pm pic.twitter.com/5OpTNrhWE4

The couple explained to KFC that they had their first date at the restaurant in 2017. Harrison then proposed to Kate at Australian landmark Uluru two years later. So basically, it was natural for them to celebrate their big day with the chain. The newlyweds were the first of six Australian couples to win a KFC themed wedding, so we can expect more fun pictures soon. The lucky couple was selected, despite there being more than 2,00 entries, after creating their own version of the popular TV show “The Fresh Prince of Bel-Air” theme song about their love for each other and of course, KFC.

As far as how they felt about the whole experience, the newlyweds stated, “We’re over the moon to have been selected for the first-ever KFC Wedding and having the Colonel present on our big day took us back to the first meal we shared together ? KFC! Our friends and family were stunned when they arrived to find out it was actually our wedding day ? and not just any wedding but a KFC wedding!”

This Queensland couple decided to put a 'wing' on it – with a world-first @kfc wedding! 🍗🍗 #KFC pic.twitter.com/DfFZbFeRMp

KFC did provide funds for the reception for the dream wedding, but the couple was required to pay for the venues, alcohol, and transportation. But fret not, all those Pepsi’s were also covered by KFC, so it’s a win-win. Congrats to the happy couple!

Be right back, making my way to KFC now.