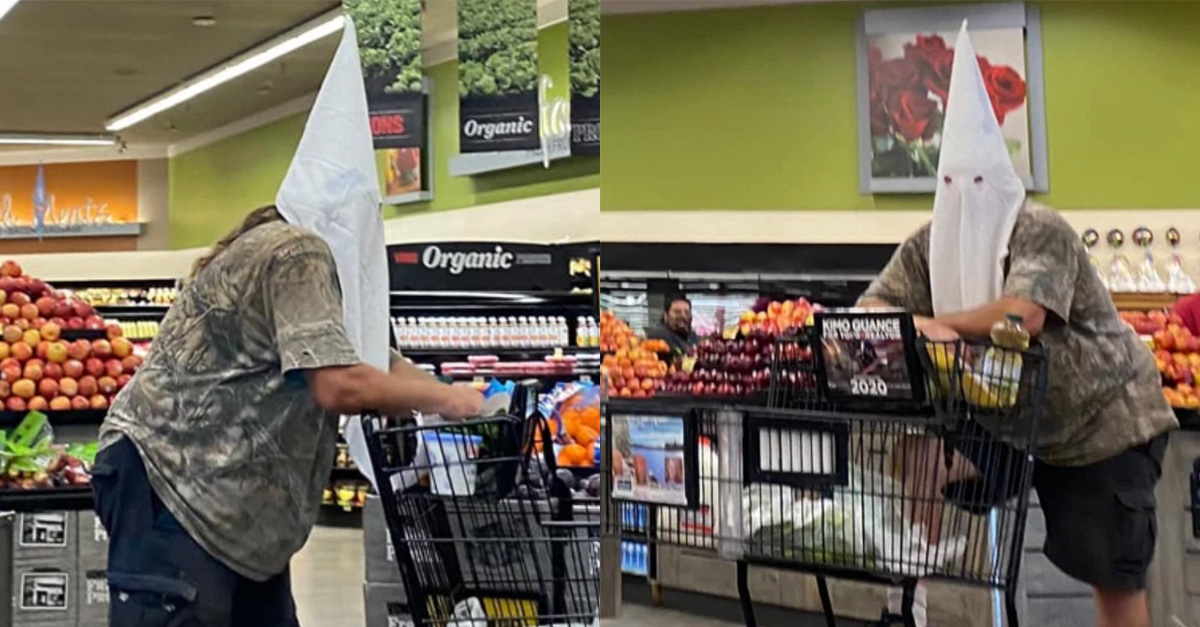 A California man with either an unfortunate lack of alternate clean linens at his home or, just, you know, plain old ignorance — or both! — was spotted in California grocery shopping in a Ku Klux Klan hood in order to cover his face.

The man, who was shopping at Vons grocery storein Santee, California, was photographed by customers both worried and perplexed and, eventually, confronted by store clerks who told him to remove the hood while he was waiting to check out. The man eventually complied, purchased what he’d come for, and left.

Residents from Santee and San Diego expressed outrage at the images of the man and his racist attire after they were posted on Facebook. Santee Mayor John Minto took to social media to say that the man’s action did not represent the values of the city.

1. It’s funny that this guy was only wearing his Klan hood and not the robe, because what he was wearing on the rest of his body is exactly what I picture people are usually wearing under their Klan robes. Cheap cargo shorts, camo shirt, a ratty ponytail, socks that look like they were purchased at a Walgreens, and dumpy shoes. This is almost too on the nose.

2. There’s a decent chance this guy was in some way doing this as a protest against stay-at-home and lockdown orders related to the Coronavirus. I don’t know what message, exactly, wearing a Klan hood gets across, but it wouldn’t surprise me if this was some extremely shitty attempt to equate the government trying to protect lives to the Ku Klux Klan’s reign of terror over black people and their allies in the South in the late 19th Century through mid 20th Century.

This story was originally published May 4, 2020.