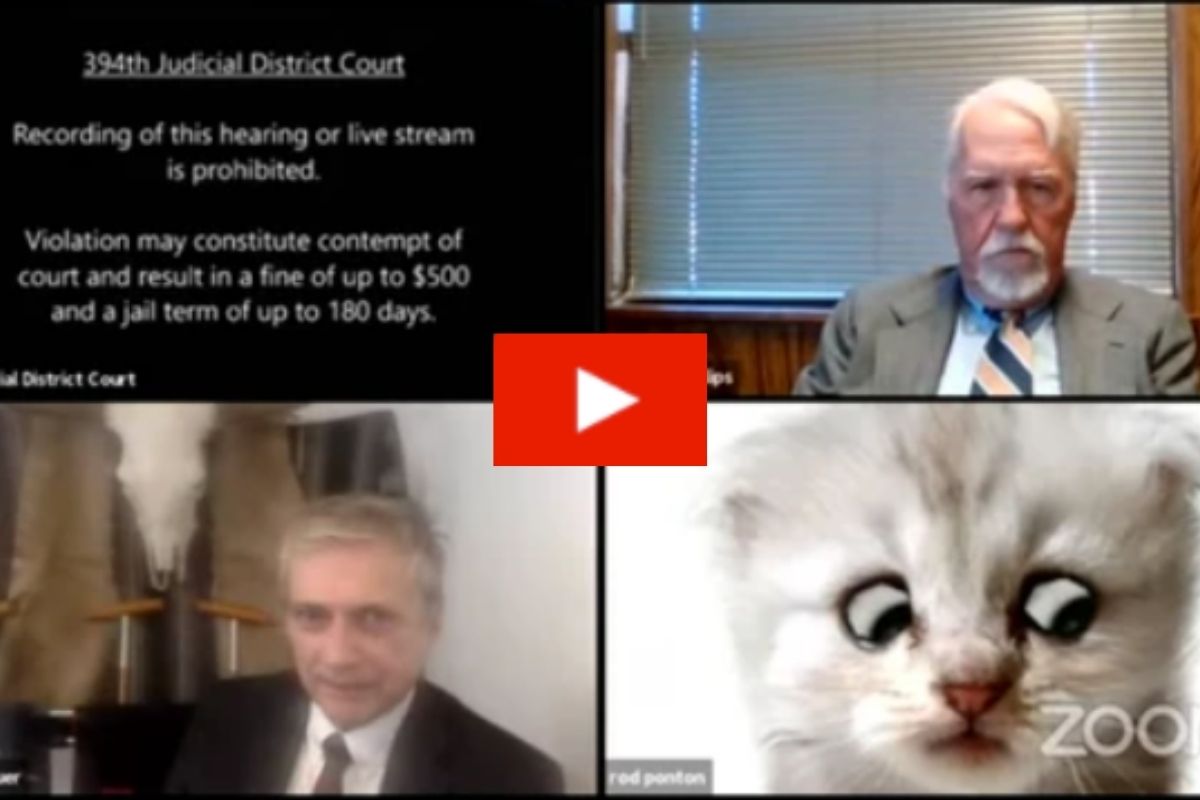 “I’m not a cat,” is probably not what you would expect to hear from a lawyer during a court case, especially in virtual court. But that’s exactly what was said by lawyer Rod Ponton in virtual court in the 394th judicial district court of West Texas, who couldn’t figure out how to take the Zoom call kitten filter off of his own face. And the entire video of the mishap is HILARIOUS.

The video starts with Hon. Judge Roy Ferguson pointing out, “Mr. Ponton I believe you have a filter turned on in your video settings,” to which Ponton, cat filter covering everything but his mere eyeballs and mouth, with a slight, frantic panic in his voice replies with, “Can you hear me judge?”

Judge Ferguson, probably trying to stay professional and keep the giggles out of the way, calmly explains, “I can hear you. I think it’s a filter.”

“It is and I don’t know how to remove it,” Ponton explained. “I’ve got my assistant here and she’s trying to remove it but uh … I’m prepared to go forward with it. I’m here live. I’m not a cat.”

Ponton told Vice’s Motherboard that he was actually unaware that the court had posted the video of the Zoom hearing and shared concerns of having his name on the live stream, blaming it on using his secretary’s computer. He said, “Oh, that was just a mistake by my secretary,” he said. “I was using her computer and for some reason, she had that filter on. I took it off and replaced it with my face. It was a case involving a man trying to exit the United States with contraband and contraband cash. All it was was a mistake. It was taken off and we had the hearing as normal.”

Attorney Gibbs Bauer, who was also on the call, told Motherboard that he thought the zoom filter was just a glitch, saying, Have no idea what caused that. Probably just a computer glitch.”

Judge Ferguson took to social media to tweet about what happened, saying, “IMPORTANT ZOOM TIP: If a child used your computer, before you join a virtual hearing check the Zoom Video Options to be sure filters are off,” he said. “This kitten just made a formal announcement on a case in the 394th (sound on).”

IMPORTANT ZOOM TIP: If a child used your computer, before you join a virtual hearing check the Zoom Video Options to be sure filters are off. This kitten just made a formal announcement on a case in the 394th (sound on). #lawtwitter #OhNo @zoom_ushttps://t.co/I0zaj0wu6K

“These fun moments are a by-product of the legal profession’s dedication to ensuring that the justice system continues to function in these tough times,” Ferguson said. “Everyone involved handled it with dignity, and the filtered lawyer showed incredible grace. True professionalism all around!”

No offense, but I would take seeing stuff like this over celebrity gossip concerning Paris Hilton or Britney Spears any day. This is what we should be seeing more of in headlines! Kids are streaming and consuming stuff on social platforms now like Tiktok, so no wonder old hears have a harder time keeping up with technology. And no, it’s not because this is in the South either, as I’m sure some up north in New York can relate to struggling with new technology. I know, even in my mid-20s, that yeah, I’m even struggling to keep up.

And it’s so refreshing to see some light-hearted humor in some form of politics. You know, with the coronavirus pandemic still around, the storming of the US Capitol, President Joe Biden and VP Kamala Harris getting inaugurated, Robinhood’s stock issues, Donald Trump’s Senate impeachment trial happening, Tom Brady winning yet another Super Bowl, videos like these are what keeps us afloat despite the craziness. We love to see it.