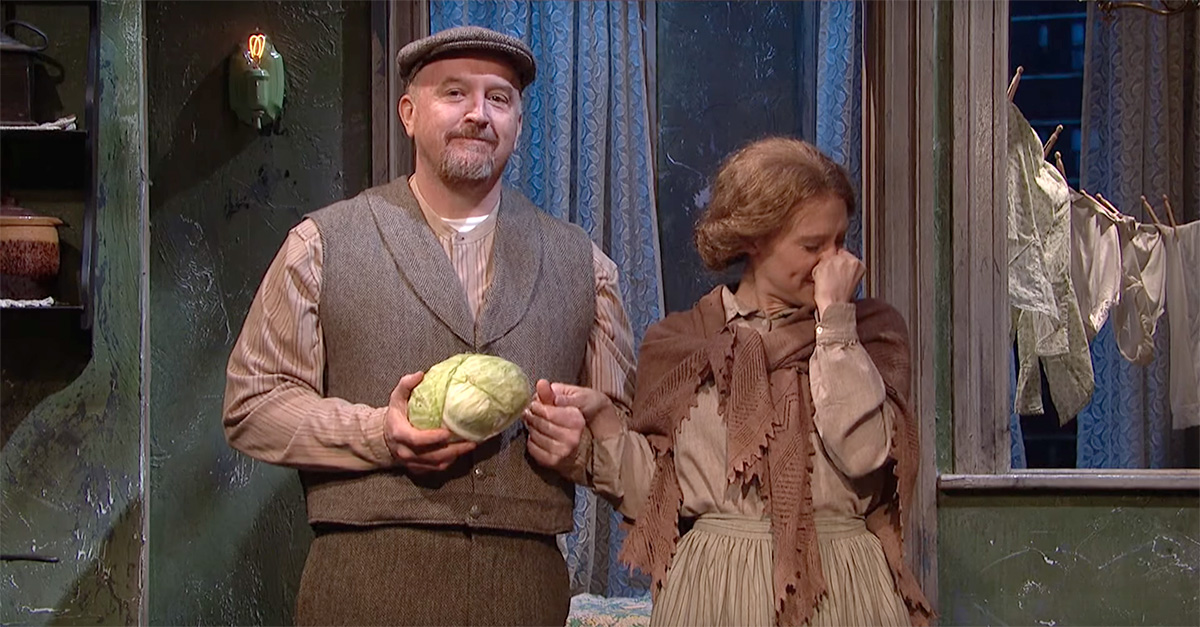 Oh, class trips. Those magical days of yore, when the banality of the classroom was traded with everything from a museum tour to an open field. In this NBC’s Saturday Night Live sketch, a school group visits the Tenement Museum in New York City, New York, where they show visitors what apartment life was like in 1913. And that includes what the tenants were like.

In this SNL sketch, host Louis C.K. and Kate McKinnon play re-enactors of an older Polish immigrant couple, the Lindowskys, who lives in the apartment. ?Oh, my darling Eva,? Louis C.K. says in a full on era-specific ensemble, complete with paddy cap. ?Sixteen hours a day I break my hands in factory so I can afford to bring cabbage home for soup.? And yes, he?s holding the cabbage.

?Mikael,? Eva answers. ?Our bellies will have to be full with love. Food will be a luxury for the next generation.?

This is when it goes off the rails a bit. Kate can?t take Louis? insane Polish accent as he says, ?I wish I could bring home more money,? and slightly begins to break during the skit. But then, the comedian just shatters into laughter as the award-winning actress next to him giggles her way through the sketch.

?There are no good jobs,? he continues. ?They were all taken by the filthy, greasy Italians.? And yeah, you can see where this is going. Kenan Thompson, playing a student, mentions at the end of the performance, “Feels kind of weird clapping for that, but all right.” And as the “students” continue to ask questions about what life was like for the Polish couple in 1913, Louis still can’t keep a straight face while talking with that hilarious accent.

Once the racist jokes start coming out, the ridiculousness could no longer be contained, ending the hilarious skit.

Editor’s note: This article was originally published on April 9, 2017.