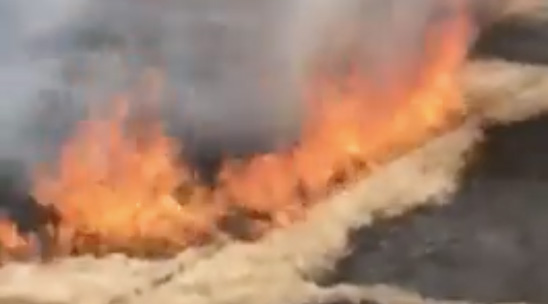 A Texas boy got what was supposed to be the most mundane, harmless Christmas gift of all time so, naturally, he ended up starting a fire with it. Granted, burning things with a magnifying glass is a time-honored boy tradition, but even still, no parent is ever really prepared to put out a raging fire on their front lawn mere minutes after giving their child a tool for reading.

That’s exactly what happened to the Parson family of McKinney, Texas this past Christmas, however. Nissa-Lynn and Justin Parson gave their son Cayden a magnifying glass and he, along with his brothers, proceeded to light the lawn on fire with it. Nissa-Lynn took to Facebook to explain the Christmas Day misadventure (after the flames were extinguished, of course).

Christmas Day was memorable to say the least!?My twelve year old son Cayden received a magnifying glass, which we thought was for reading, but instead he tried to see if he could light a fire with it. We discovered that he and his two brothers went out on the driveway and burned a couple holes in some paper. Everything was under control until the boys came running into the house telling us that a corner of the lawn was on fire and the Christmas lights were melting! Justin and I rushed outside to see the entire front lawn turning black! We grabbed buckets, Justin turned the sprinklers on, and I grabbed blankets to smother and trap it – before it could spread any more into the neighbors yard! What a sight to see – a bunch of people running around crazy trying to put a front lawn fire out while wearing matching Christmas jammies!

Oh and never buy a magnifying glass for your son!???

The boys’ father, Justin Parson, told to the local Fox news outlet that when Cayden opened his gift one of his brothers exclaimed, “Yay! Now we can light stuff on fire.”

Fortunatley no one was hurt by the fire and aside from the grass and some melted Christmas lights, the damage was minimal. One day this will surely all be a funny family story, though for now Cayden and his brothers are probably doing more chores than they ever have in their entire lives.