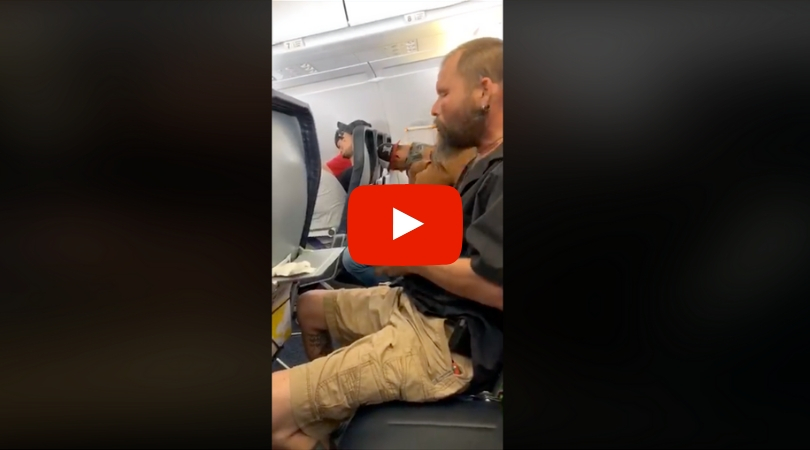 In today’s ‘what the heck were you thinking’ story, a man apparently forgot that you can’t smoke airplanes after literally lighting a cigarette mid-fight. Despite the practice being banned for the past two decades, the man boarded a Spirit Airlines flight to Minneapolis, Minnesota and decided to simply make his own rules.

The man, dressed in cargo shorts and a dark shirt, was filmed by a passenger sitting in the window seat of the same row. The smoker, who you can tell is clearly drunk, is seen just chilling in the aisle seat, blowing his smoke to everyone on the plane. Oblivious to the fact that you can’t smoke while in the air, he takes another swig of the cigarette, leans back, and shuts his eyes taking in that sweet sweet smoke.

Of course, the fellow passenger opposite of him is seen looking around the plane, hoping other passengers are looking at what this man is doing. He then presses the call button to flag a flight attendant, which is exactly what most of us would do. A cabin crew member comes over and taps the man, removing the cigarette and putting it out.

The smoker gets startled repeating, “Oh my God,” as the flight attendant tells him that what he’s doing is illegal, because duh, and demands to see his boarding pass.

What made me laugh the most about this whole dumb thing, was the fact that this man didn’t even think he was doing anything wrong! Bless his soul. Like..really, bud? You don’t think that smoking on an airplane is wrong? Exposing all these innocent people to secondhand smoke? Come one on, give me a break.

As expected, law enforcement met the man upon arrival to Minneapolis and escorted him off in a jiffy. Which I mean, poor dude. The passengers could have at least just told him to put it out, rather than making this man pay a $4,000 fine! Just tell him, “Hey dude. You can’t smoke in here, put it out.” But nooo, they have to make a huge scene out of it.

But then again, I don’t blame them. I personally hate the smell of cigarettes so I wouldn’t want my air vent to blow out that nasty smell for 3 hours. Now, I don’t have to remind you that smoking is illegal on any kind of airplane, has been since 2000. But, you know, sometimes we just need a little reminder. So here you go.

Hey you. You can’t smoke on airplanes. Got it? Got it.

This article was originally published on May 24, 2019.