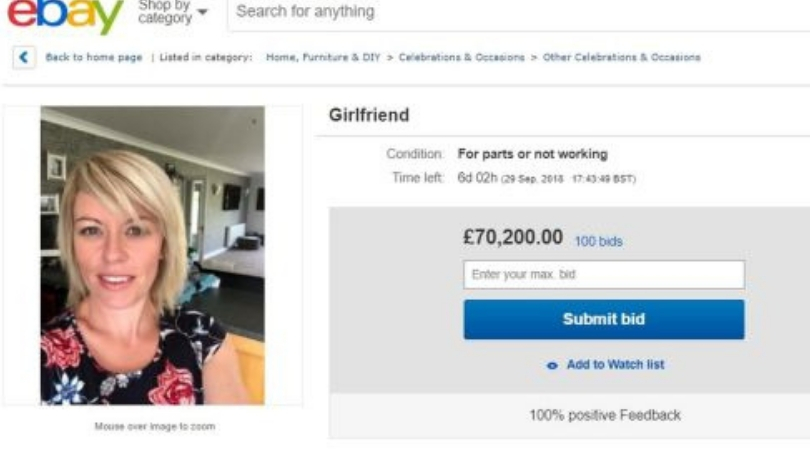 eBay is the land of everything and anything for sale. You can literally find everything on eBay, whether it’s a ghost in a jar, a gross used towel, or Justin Timberlake’s half-eaten French toast. It’s all there. Well, it’s safe to say things got a little out of hand when a man decided to take a revenge game a little too far. 34-year-old Dale Leeks from Essex decided to surprise his girlfriend, 37-year-old Kelly Greaves, by selling her on eBay.

As a joke and an act of revenge for whipping him across his butt in a riding shop, Leeks decided to create a listing dedicated to his girlfriend describing ‘her conditions.’ Some of the conditions read ‘for parts or not working’ saying there was a ‘constant whining noise.’ As if Greaves was a used car, Leeks described her as ‘fairly tidy but close up shows signs of wear,’ whining that she sometimes had leaks but nothing that can’t be plugged. BUT, like most things on eBay, everything quickly backfired and Leeks actually started receiving bids.

Within hours, the listing had been viewed more than 80,000 times with over 1000 bids. The two were on a night out when Leeks wouldn’t stop getting messages about the ad from all across Europe, Australia, and the United States. Within 12 hours the couple revised up to $50,000 bids. But like everything in life, things took a turn, and eBay removed the listing 24 hours after the post was listed, due to its policy against selling human body parts or remains (HA), not before reaching a whopping $119.000!

What shocked me the most about this whole obnoxious scenario was the fact that some bidders actually took it seriously and the fact that eBay has an actual policy for this. Clearly, it’s happened before. Of course, most of the comments he received on eBay were jokingly messing with the couple, which is understandable. It was funny, I will admit, but It’s still a little worrisome. Luckily the couple laughed about it, saying they definitely weren’t expecting the response it received.

The couple has been friends for 10 years and has been dating for a year. Clearly, these two are beyond in love and are on the same page when it comes to pranking. Heck, If I found out my boyfriend was selling me, I’d report him myself.  But in all honesty, I can’t wait for what Kelly does. We believe in you, Kelly! Make us women proud.

This article was originally published on January 16, 2019.