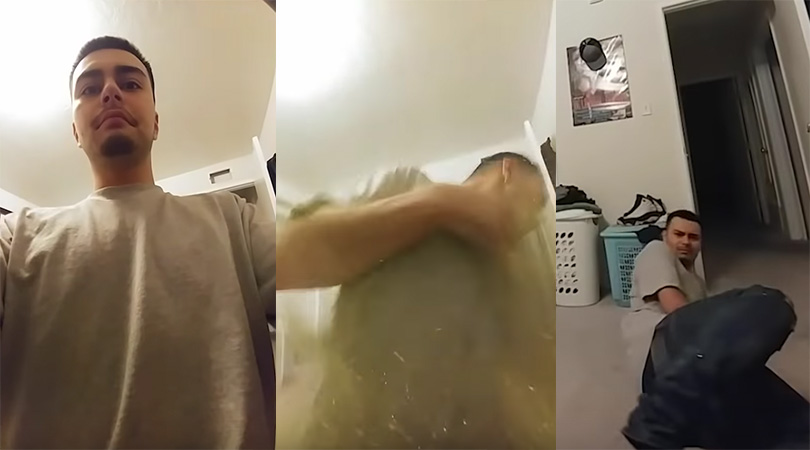 YouTube Mark Rober hates porch pirates, i.e. the trash human beings who steal packages off of other people’s porches, especially during the holiday season. You know, basically the equivalent of stealing presents straight out of Santa’s sleigh. It’s an act that’s not really far off from literally stealing candy from an unattended baby. These people are actual Grinches.

I have long been of the opinion that we should, as a nation, be constructing and laying elaborate booby traps to deter, embarrass, and mildly (only mildly!) harm porch pirates. There should be a national holiday where we all stay home and build these traps. Fathers and sons, mothers and daughters, grandparents and grandchildren happily sitting around the house together the night of Cyber Monday, constructing small explosive devices packed with paint or stink bombs, hiding pepper spray that will be triggered by a laser, and sharpening the spikes they’ll place carefully in the tiger pits they’ve dug.

That’s the sort of Norman Rockwell painting I want to see.

Anyway, Rober made a YouTube video showing off his own glitter and fart bombs, which he planted on the porches of ten of his fans who applied for the honor of covering a porch pirate in farts. The packages are disguised as expensive Bose headphones, which makes them extra tasty to curbside thievery.

This is all, just, so wonderful. From the MacCauley Culkin cameo to the fart spray testing to, of course, the actual punishing of the douche bags who think it’s cool to steal other people’s stuff. I would pay twenty dollars to watch three entire hours of this in a movie theater. Inject this schadenfreude straight into my jugular. I need a whole IV bag of it. SMELL LIKE WHAT YOU ARE YOU PIECES OF SHIT.

All the credit in the world to Rober here. I won’t even try to explain his Christmas IEDs. Just watch the video. They’re ingenious and brilliant. Apparently, the guy quit NASA to be a YouTube celebrity/real-life superhero. Will he one day be our Tony Stark? Based on this video, I’m okay with that.

This story was originally published December 18, 2019.