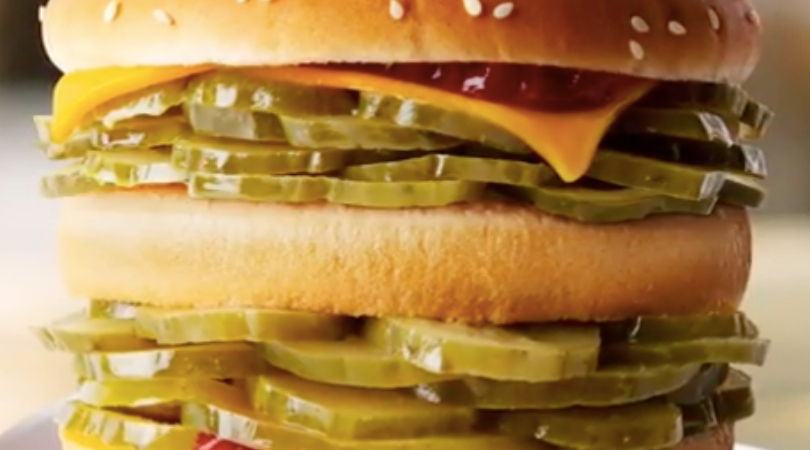 Happy April Fools! Cue in all the jokes, pranks, fake advertisements, and stories. It’s honestly the longest day of the year. No, not time wise, but energy wise. Think about it, you’ll see something on the internet that is too good to be true, and then click it, and automatically you’re let down. It’s exhausting! Like this ‘McPickle’ burger from McDonald’s which actually sounds like something I would eat. I’m a pickle fan, okay! Leave me alone.

Mcdonald’s, of course, couldn’t let April Fools pass without putting their two cents in, and what’s better than to include pickles in there. The new McPickle Burger is exactly what you would expect it to be. It’s literally layers of layers of layers of pickles and no meat whatsoever, between two buns. The perfect cruel April Fool’s Joke.

McDonald’s in Australia posted a video of the burger on Instagram, with the caption, ?Pickle lovers, it?s the news you?ve all been waiting for. We?re super stoked to announce the launch of our brand new McPickle Burger. It?s time to tuck into juicy, flavorsome pickles layered between melted cheese, ketchup sauce, and toasted sesame seed buns. It?s sure to be a treat for all your senses.?

Pickle lovers, it’s the news you’ve all been waiting for. We’re super stoked to announce the launch of our brand new McPickle Burger. It’s time to tuck into juicy, flavoursome pickles layered between melted cheese, ketchup sauce and toasted sesame seed buns. It’s sure to be a treat for all your senses. #dailynuggets #mcpickle #pickleoverload #maccas #imlovinit

But, of course, the internet quickly caught on to the joke, realizing it was April Fools joke. Surprisingly enough, people were getting angry at the fast food chain, because this is what people actually want! A burger with extra pickles that is available year round. Can you blame them? We love our pickles! Who doesn’t like extra pickles on their burger?

So yeah, good move McDonald’s, I applaud you for your prank. But, I bet you didn’t expect people actually asking for a pickled burger, huh? Your move now, make us happy and give us that sour burger asap!

McDonald’s isn’t the only company that tried to prank gullible people all around the internet. Some of these are pretty clever. Ridiculous of course, but clever. So here are some of my favorite pranks that, yes, I’ll admit, I had to check twice to see if they were real or not. You just never know!

We recently surveyed our customers and identified a major pet peeve. 🐶

Watch: This Is Why Coca-Cola Tastes Better at McDonald’s