If you think McDonald’s tasted like crap the last time you ate it that might be because your hands were covered in actual crap. Then you got that crap on your food and then ate that crap, mixed with the McDonald’s. Or you just weren’t eating a McGriddle and hashbrown.

But, more importantly, the last time you were at McDonald’s your hands may very well have ended up covered in fecal matter. If that McDonald’s had one of those touchscreen ordering stations. Probably a fitting fate if you’ve ever posted a meme making fun of fast-food workers for trying to secure higher wages. Instead being replaced with automation, but troubling nonetheless.

A study in the United Kingdom that tested eight different McDonald’s locations with touchscreen ordering devices between London and Birmingham found that they were all covered in enough gut. As well as fecal bacterial matter to put people in the hospital.

And if you’re thinking to yourself right now, “Well that was in England, I’m sure they’re fine here” now is the time to let you know that I have some homemade soft brown diamonds to sell you.

According to microbiologist Dr. Paul Matewele, these bacterias are the kind that causes a ton of infections in sick patients in hospitals all the time. And, obviously, there’s more than enough bacteria on these touchscreens to get even a healthy person sick. Let alone someone with a weakened immune system. (So maybe don’t take Grandma to McDonald’s any time soon.)

One machine even tested positive for staphylococcus, a highly contagious bacteria that can cause blood poisoning and toxic shock syndrome.

McDonald’s assured its customers that the touchscreens are cleaned frequently and that all customers are able to wash their hands should they so choose. (Which, of course, they never do.) But they didn’t deny that their touchscreens were, in fact, covered in sickening turd glitter.

So yeah, enjoy this knowledge the next time you’re at a McDonald’s with a touchscreen, thinking to yourself how convenient and preferable this is to have an error-prone human take your order. Because what McDonald’s touchscreens are most efficient and effective at, it turns out, is covering you in diarrhea mist.

Watch More: Yes, McDonald’s is Finally Bringing Back The McRib! 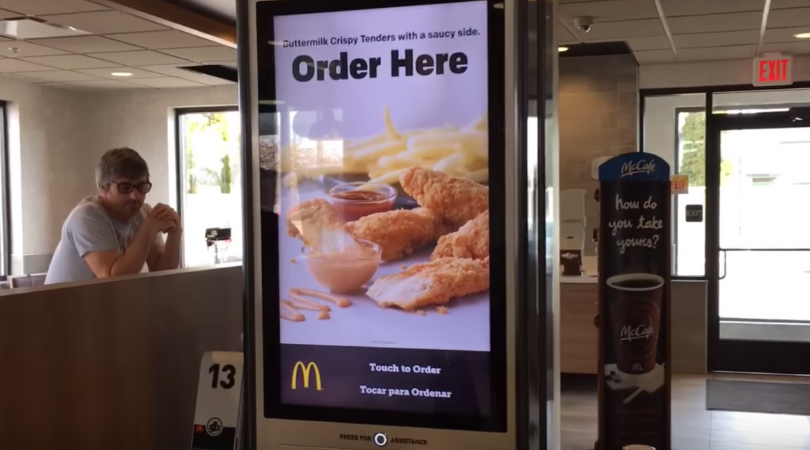