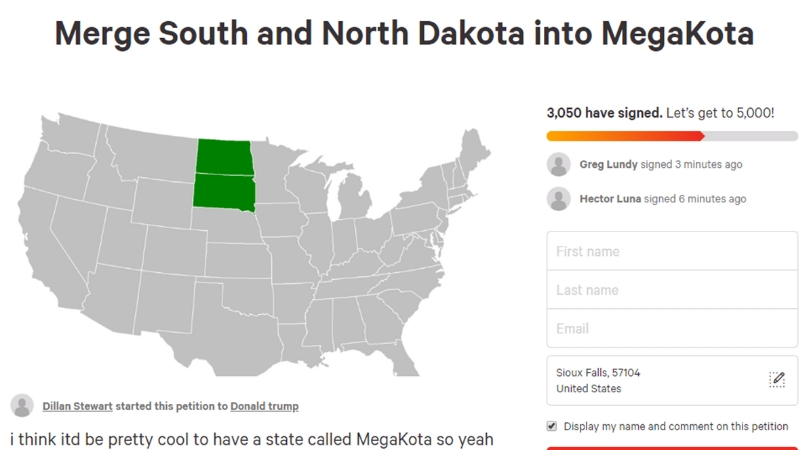 I hate the internet; I really, really do. Sometimes, I am amazed by what I find on a daily basis. Like this petition. This dumb petition that makes me question humanity. Turns out, Dillon Stewart, a change.org user from Fargo, North Dakota, didn’t have much to do and started a petition to combine North and South Dakota into ‘MegaKota’

His reason for the petition? He thinks it would be “pretty cool to have a state called MegaKOTA, so yeah.”. I swear I’m not making this up. What is surprisingly even more shocking is that 4,890 people have already signed the online petition which asks President Donald Trump to turn both Dakotas into a single state! I don’t know about you, but to me, MegaKota sounds like I’m about to fight with a character from Mortal Kombat.

The goal is getting 5,000 signatures on the petition. Surprisingly, supporters actually agree saying they really like the idea of a stage called “MegaKota”, dubbing it is the best idea of 2019. Seriously, just look at these comments.

People are even tweeting about this whole mess and seem to agree with the petition and are giving ideas. You can’t make this crap up.

if we’re merging south and north dakota, then we should call it ‘Dakota’. it’s way much better than megakota like that sounds so bad

See, told you. This is the dumbest petition ever. I am done with the Internet. Bye.