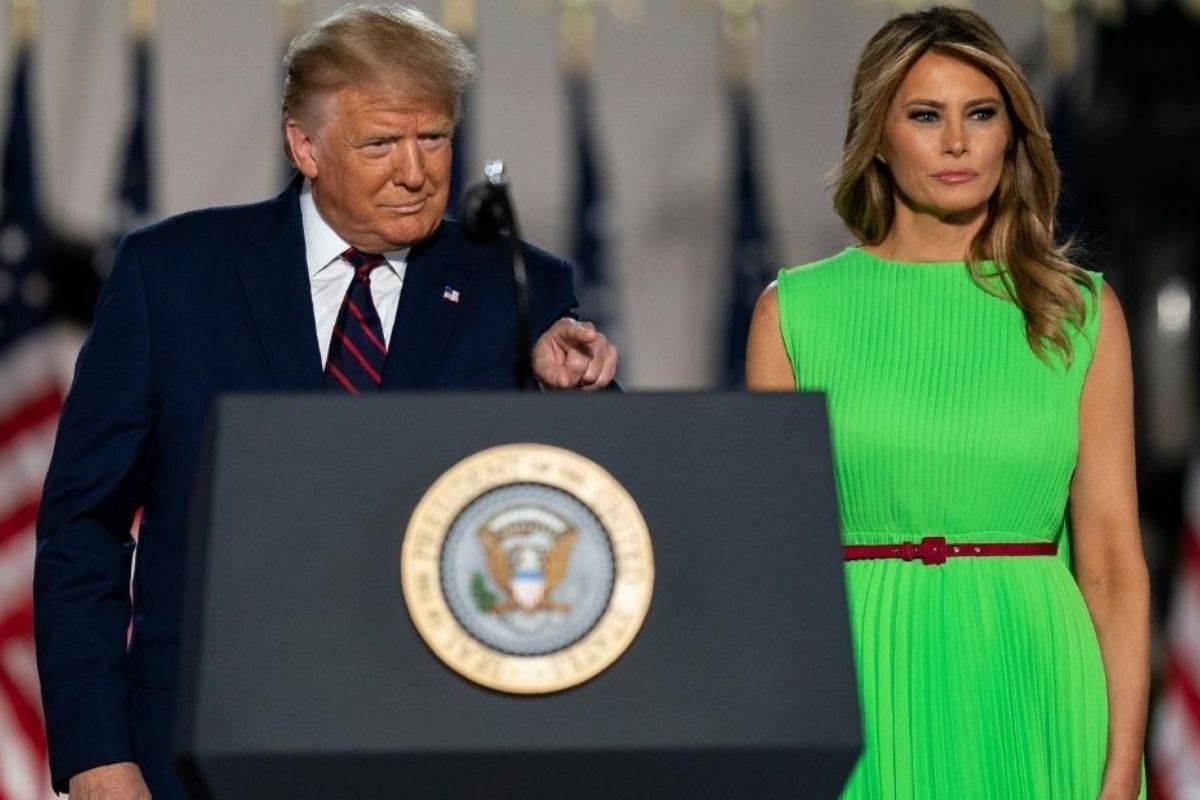 Twitter users are concerned for Melania Trump after several people are questioning her facial and physical gestures. On Twitter, several users have posted videos and images of Trump, asking if she needed help. Obviously as part of an ongoing joke, after a video surfaced of her refusing to hold President Donald Trump’s hand, repeatedly.

With the 2020 presidential election approaching, several people are looking for ways to make President Donald Trump look silly on social media. Unfortunately, Melania Trump is making it pretty easy for social media users and is the one getting the attention instead of her man. A recent video of the First Lady recoiling from her husband’s attempt to hold your hand has now become insanely viral which has several laughing. The extremely awkward exchange between the couple shows Melania’s hand swatting Donald’s seeking hand away as a get off the Air Force One.

You can clearly see the president is attempting really hard to hold her hand but no, she pulls a ninja move and moves it away because apparently holding her handbag is more important than holding his hand. Honestly, I’m with her. That purse is probably more expensive than her whole outfits. Plus I’m pretty sure she was making sure not to fall while going down the steep stairs in heels especially in those windy conditions.

But of course, Twitter exploded with several critics guessing that the First Lady couldn’t wait until the pair move out of the White House, which could happen if President Donald Trump is not re-elected in November. Users suggest Melania might get a separate home, but others insisted Trump and his wife, who share son Barron Trump, were doing just fine and will be spending the next four years together in The White House. This isn’t the first time the couple was filmed playing hands war in public.

FIVE SECONDS IN: Look at him try to grab Melania's hand, twice, and both times getting rebuffed as if he were a subway groper. https://t.co/VcKBJEragS

The “First couple” have been spotted numerous times wrestling each other to hold their hands and showing somewhat of a common public display of affection. In 2017 the couple was also spotted trying to hold hands while touching down Tel Aviv, Israel, where Trump reached for her hand only for her to literally snubs it away. On December 18th, when the Republican couple exited the White House to board Marine One on the way to Ohio, Trump again tried to grab his wife’s hand only to fail once more.

There’s was a moment in April 2018 when they were meeting with Emmanuel Macron, where you can see Donald Trump awkwardly trying to grab the First Lady’s hand with just with his fingers only for her to swat it one more time. I can go on and name all the times that this has happened, but honestly, that’s too many to list. But I guess I’ll just show you through Twitter videos I found online that have me cracking up because well, this is just too funny. I love the internet. We need a body-language expert to get in on this asap.

Editors Note: This article was originally published on August 21, 2020.