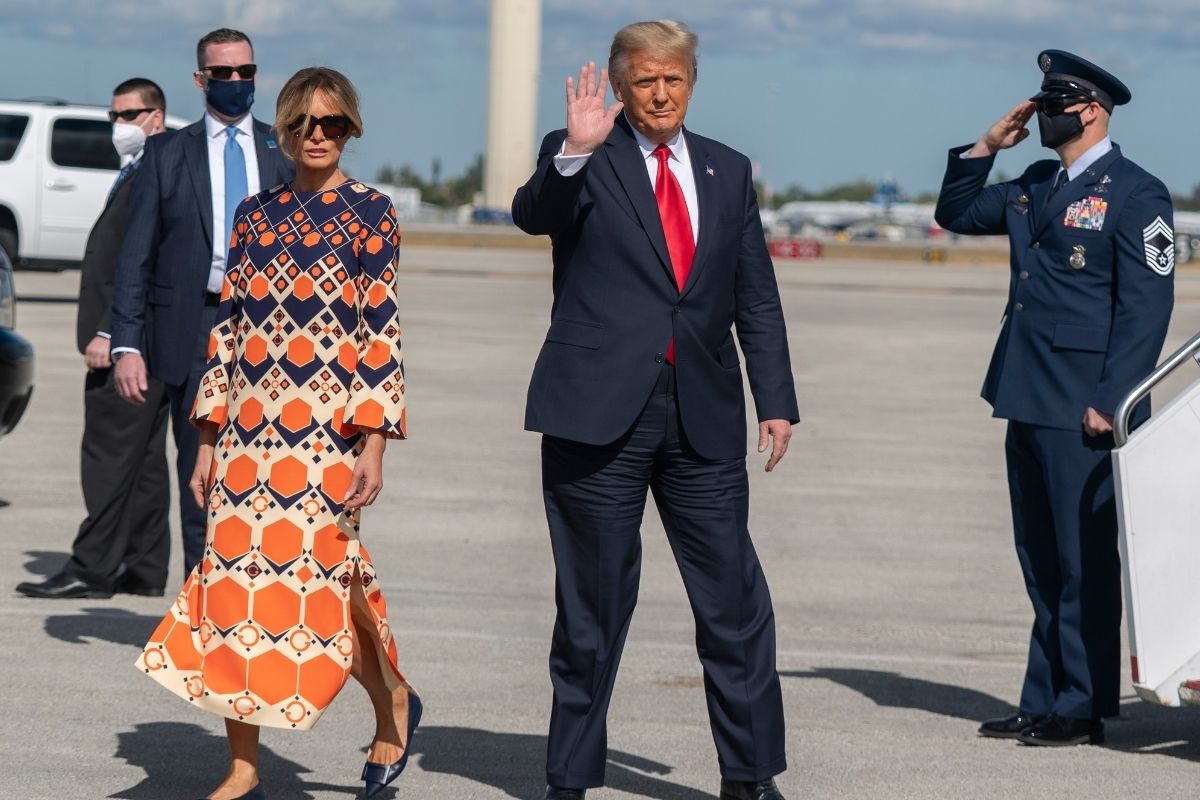 Oh man, this is hilarious. I feel like this is probably my favorite video of the year thus far. I’m pretty sure the internet is agreeing with me on this. Melania Trump is really over her being the former first lady, and you can totally tell. She is hilariously going viral on social media once more after she was seen walking away from former president Donald Trump during their last photo op together as president and first lady.

Melania’s snub to her husband has now become THE internet meme of 2021. The video was filmed as the Air Force One touched down in Florida following Donald Trump’s departure from the White House on Wednesday, January 20th. While walking from their jet to the car, which was set to drive the former president and first lady to their Mar-A-Lago hotel located in Florida, the press congregated to take pictures of the duo for the final time. All this occurred as Joe Biden and Kamala Harris were sworn in at the Capitol as President of the United States and Vice President, respectively.

Although the Republican waved and smiled at the press when he exited the plane, Melania quickly walked out of the shot pretending she didn’t see them and said “peace out I’m done, it’s all about President Joe Biden and Dr. Jill Biden.” Well I mean technically she didn’t say that but you can totally see she wanted to say it by just looking at her face. As expected, the footage quickly went viral on Twitter and has now been viewed more than 4 million times in the day since it was posted online. Taking advantage of the whole situation, social media users have also decided to create Gifs and memes looping Melania’s dismissive attitude. Despite Melania’s diss at cameras, she spoke quite positively about her experience as a first lady in a video address taken in Washington D.C. that she later shared on Twitter.

Former first lady Melania Trump stated, “The past four years have been unforgettable. As Donald and I conclude our time in the White House, I think of all the people I have taken home in my heart and their incredible stories of love, patriotism, and determination. Together, as one national family, we can continue to be the light of hope for future generations and carry on America’s legacy of raising our nation to greater heights through our spirit of courage, goodness, and faith. No words can express the depth of my gratitude for the privilege of having served as your First Lady. To all the people of this country: You will be in my heart forever. Thank you. God bless you, and God bless the United States of America.”

I mean, let’s face it, we all know she didn’t write this. It was probably the press secretary who came up with the speech, but hey, I will let her have this one. I have to give it to her for always being in the spotlight, she tried. Anyway, I hope life treats you very well Melania, I’m sure a lot of people will miss you.