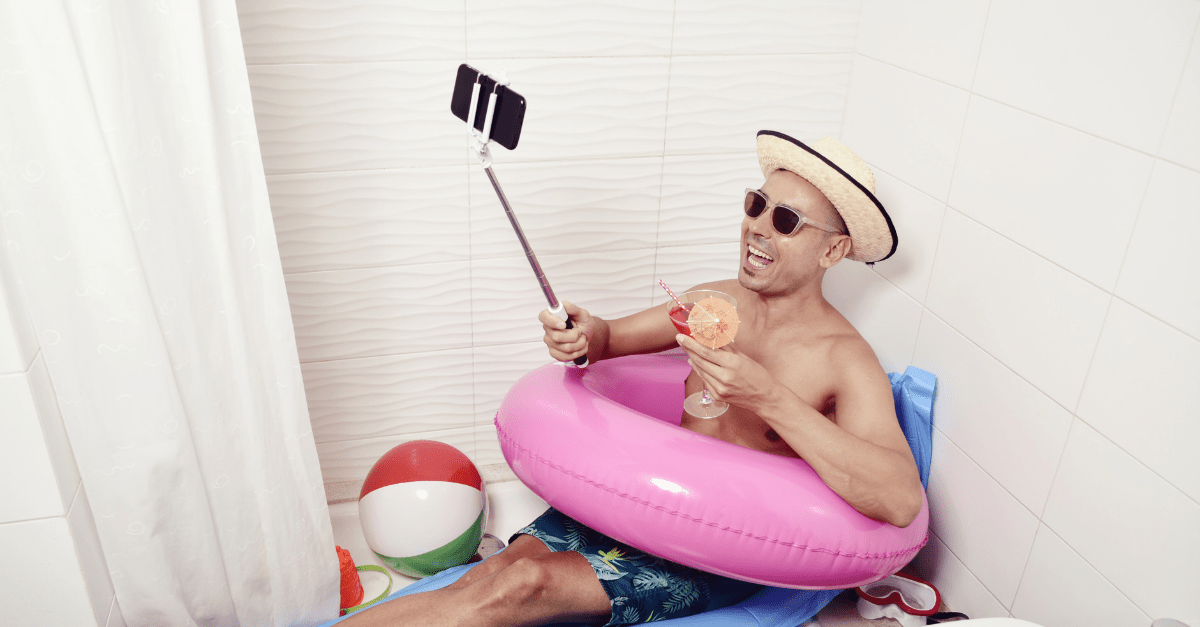 “What were you doing in there?” my girlfriend will ask incredulously once I’ve come out of the bathroom thirty or so minutes, at least, after I entered it. I deflect the question by implying or outright describing something gross. “You don’t wanna know,” or, “Pushin’ out poison,” I’ll tell her. Or maybe a simple, “We’re out of toilet paper.” That usually ends the conversation, which is good, because I don’t want to answer any more questions about what I’m actually doing in there. About my precious quiet time.

My diet consists mainly of salted meats and spicy sauces so, to be sure, a portion of the time I spend in the bathroom is used to exorcize some real evil. But that’s like ten minutes tops. The rest of my time in the bathroom is spent reading, watching videos, or just thinking. In silence. With no threat of being bothered with chores or conversation or even the dog. It’s just me, and it’s so wonderful that I don’t even mind having to be on the toilet seat to accomplish it.

It’s no surprise then that I’m not the only man whose bathroom is a sanctuary. According to a new study from Pebble Grey,, the average man spends 7 hours a year in the bathroom just to get peace and quiet (i.e. they’re not taking care of any natural business, they’re just there to be alone).

If anything, this sounds low. I’m probably clocking around 7 hours every month. And I don’t even have kids. Once that happens I’m probably going to fake dysentery.

But yeah, the bathroom is where men find our brief respite from the noisy, stupid, annoying world around us. At home and from work. Particularly because no one wants to really pry about why you’ve been in there for so long. Take it from the world’s foremost expert on bathroom breaks.

Called in sick with "butt mud" again. Once could be faking, but 2 days in a row really authenticates how your can is shotgun sprayin' wet doo doos.

All you had to do was make a few uncomfortable phone calls and tell your boss that you can't work because your backdoor is a pudding factory. Boom. Free 5 day weekend. It's not that hard, you guys.

You can't fire someone for havin' diarrhea. Pretty sure the ACLU would swoop in and shut that down. Be gettin' paid in court, you guys. $$$

Took a sick day with a "bowel issue." It's important make a cushion for yourself after a no call no show Monday at your place of work. Leanin' into the absurdity of a questionable absence causes a confusing situaish that most employers would rather not deal with, you guys.

Took the day off again. Boss says, "I'm gettin' sick and tired of your explosive poop shoot excuses. You need to bring in a doctor's note." Gonna bring in a Zip Lock filled with brown backdoor soup as proof tomorrow. Here's your "doctor's note," boss. Don't eat it all at once.

I can't be the only person in the world who ate a large Philly Steak pizza from Domino's last night. Thousands of people probs got their b-hole violently rippin' today. Illness comes in many forms. It's important to have compassion for those struggling with a medical issue.

Unfortunately even the bathroom isn’t always a safe space. The same study says that one in ten bathroom breaks are interrupted. YOU LEAVE US ALONE.

Watch: HOW TO MAKE A DIY CAMPING TOILET (AND A LOT OF FUN OF YOURSELF)