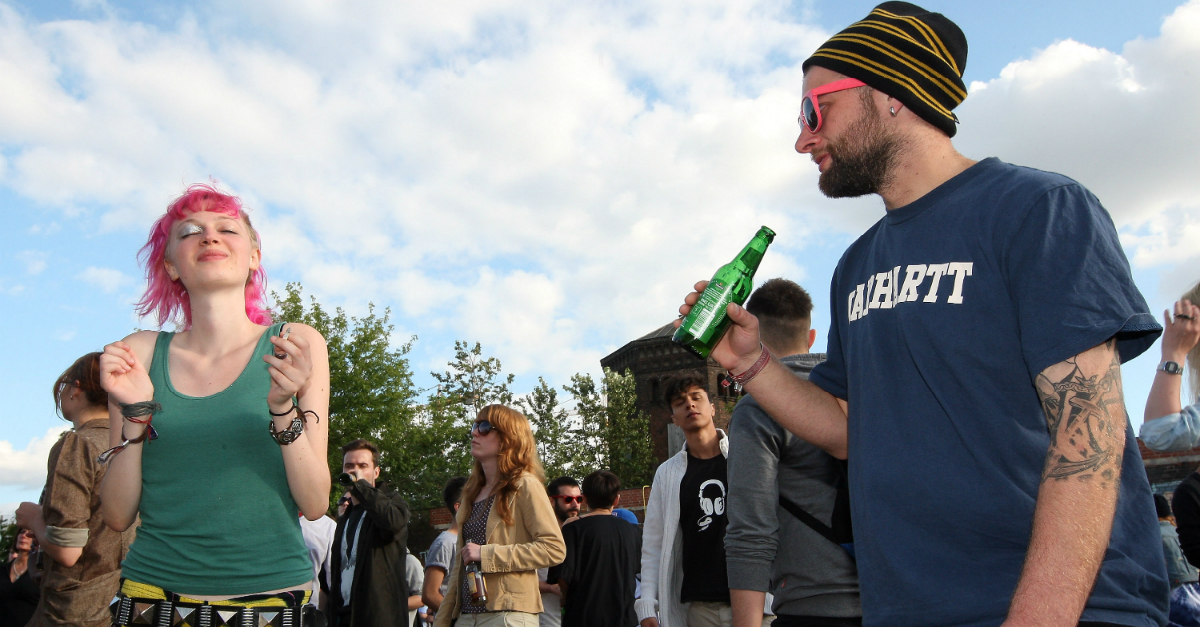 Adam Berry/Getty Images
BERLIN, GERMANY - JULY 21: Attendees dance at the second annual Hipster Olympics on July 21, 2012 in Berlin, Germany. With events such as the 'Horn-Rimmed Glasses Throw,' 'Skinny Jeans Tug-O-War,' 'Vinyl Record Spinning Contest' and 'Cloth Tote Sack Race,' the Hipster Olympics both mocks and celebrates the Hipster subculture, which some critics claim could never be accurately defined and others that it never existed in the first place. The imprecise nature of determining what makes one a member means that the symptomatic elements of adherants to the group vary in each country, but the archetype of the version in Berlin, one of the more popular locations for those following its lifestyle, along with London and Brooklyn, includes a penchant for canvas tote bags, the carbonated yerba mate drink Club Mate, analogue film cameras, asymmetrical haircuts, 80s neon fashion, and, allegedly, a heavy dose of irony. To some in Berlin, members of the hipster 'movement' have replaced a former unwanted identity in gentrifying neighborhoods, the Yuppie, for targets of criticism, as landlords raise rents in the areas to which they relocate, particularly the up-and-coming neighborhood of Neukoelln. (Photo by Adam Berry/Getty Images)

Millennials might be easy targets, but that doesn’t mean it’s not still hilarious to make fun of them.

The Twitter account @HashtagRoundup recently asked users of the social media/microblogging platform to tweet millennials’ New Year resolutions using the hashtag #MillennialNewYearResolution, and they opened a big can of artisanal worms, because many of the suggestions were absolutely savage!

Hold on to your avocados, because you’ll be laughing all the way to the co-op! Unless you’re a millennial, in which case you’ll probably be deeply offended.

I will continue to save my parents from suffering the pain of empty nest syndrome. You're welcome Mom &/or Dad. #MillennialNewYearResolutions

Limit my "I'm a vegan" announcements to three times a day.