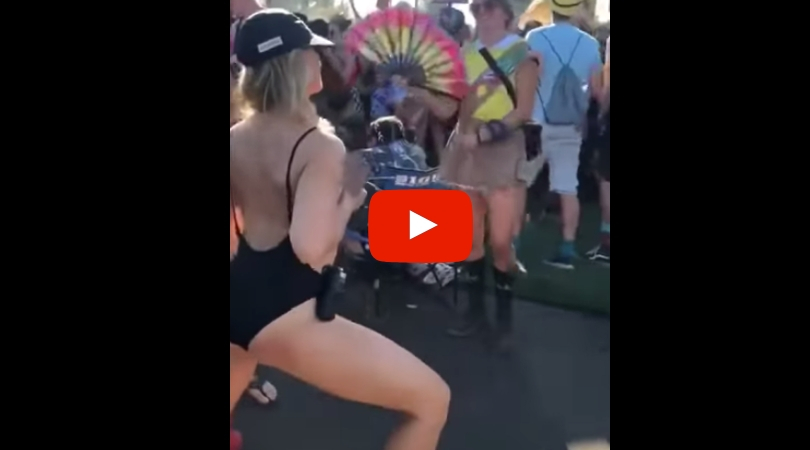 Mom gone wild? Yup, it sure looks like it. You know how they say that sometimes after having a baby you never sleep again so then you become so delusional that you basically don’t know what you’re doing? Well, meet this mom, my new hero, who probably was running on exhaustion, an insane amount of alcohol, and some good ol’ weed.

As you can see, this mother is poorly dressed in a black leotard, red boots, and a hat, just twerking around having a good time. Like you should whenever you’re at a music festival, right? Now, I’m sure that at every music festival gets their fair share of boobs, maybe even a bit more. BUT, I bet what people don’t expect to see at one is breast milk.

Yes, out of nowhere this woman just takes off her leotard straps and begins to squirt the crowd with her own breast milk circling around like a windmill. It just shoots straight up in the air like whipping cream cans or silly string flying in the air.

*Side note: I do have to say the super soaker looks pretty darn good for being a new mom, that’s for sure.

Don’t get me wrong, I’m not one to judge for what you do during music festivals or EDM events. I mean, I’ve had my fair share of embarrassing moments. But shooting out my own breast milk out of my boobs isn’t one of them. This just seems crazy, and well, absolutely gross.

Can you imagine someone coming home after the festival DRENCHED in some good ol’ bodily fluid trying to explain that what they got drenched in was actually breast milk and not alcohol or water? Yeah, that conversation would probably go something like this.

“Yo man, how was the festival?”
“Well Dylan, you know, some lady was dancing right. She then did this crazy split and out of nowhere popped her boobs out!”
“Oh rad, you saw some boobs!?”
“That’s not all CHAD, this woman then proceeded to shake her boobs like if she was a windmill and then put her hands on her boobs and squeezed!”
“Wait…what?”
“Then out of nowhere….liquid came out!”
“Wait, bro, are you saying…?”
“YES BRO. MILK…CRAZY SALLY WAS SPRAYING THE WHOLE DANCE CROWD WITH BREAST MILK, DAWG!”
“Yooooo breast milk?!”
“BREAST MILK.”

Yup, good times. Talk about a wild festival, huh? My question here is, how much milk does this lady produce on a daily? Forget about breast pumps, it’s all about fist pump and dump, am I right?

Watch:Guy Became a “Burning Man” After Sprinting into the Festival’s Namesake Fire