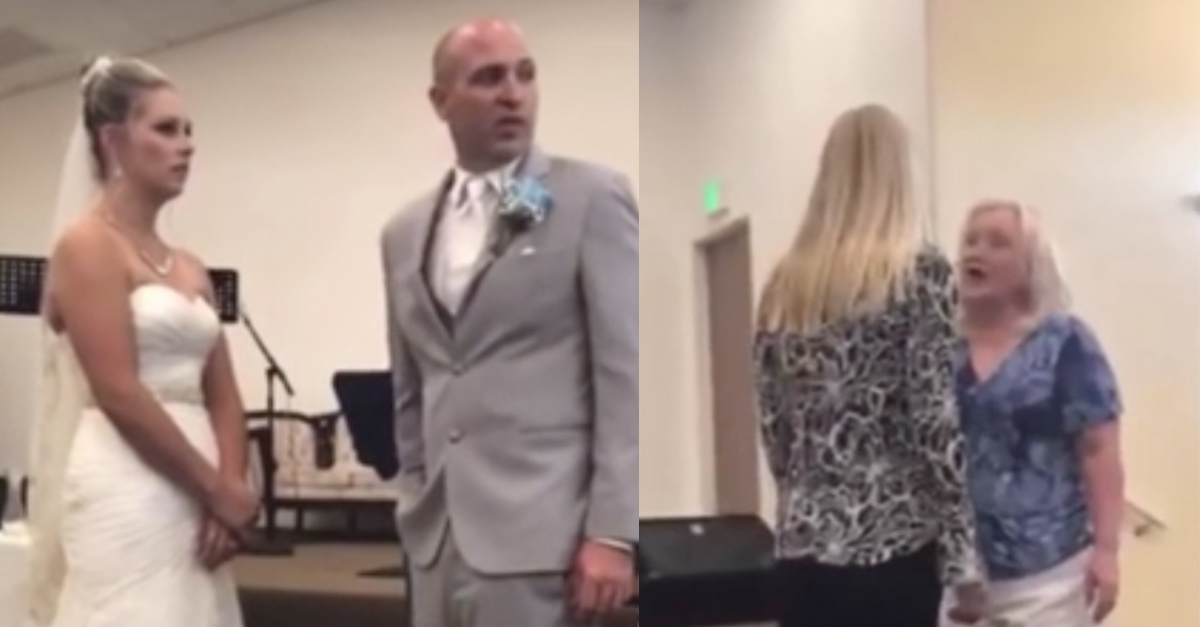 The queen of all nightmare mothers-in-law was filmed publicly going off on her new daughter-in-law literally at the moment the woman was becoming her daughter-in-law. During the exchanging of vows to her son. Right in the middle of the wedding.

The spat in question began just after the bride finished reading her vows to her soon-to-be husband. Apparently the vows included a line about her loving the groom, flaws and all. The militant MIL took offense to the inclusion of the fact that her son is an imperfect human being and interrupted the ceremony. It was a real special moment. Just no the kind of special you usually want at your wedding.

The mother-in-law, who is apparently named Judy, first interrupts by angrily yelling, “You don’t have to say my son has flaws.” The groom turns around to quiet his mother before the bride chimes in, by offering her mother-in-law the exit and saying, “You can leave.” Judy responds by saying she doesn’t have to leave because she paid for the bride’s dress. A guest in the background can be heard yelling, “Let’s calm down let’s calm down” in a futile attempt to un-ruin the moment.

The bride then says to Judy, “You’re not going to ruin my day.” Judy, not satisfied with the attention she has already gotten, again complains about the bride’s vows, at this point bringing to entire ceremony to a screeching halt.

Another guest then chimes in with, “You can leave, Judy.” It then appears that one of Judy’s own family members stands up and confronts her. The bride then again tells Judy to leave and multiple guests get up to confront the disgruntled mother-in-law.

All things considered a pretty worst-case mother-in-law at a wedding scenario. The bride can at least take solace in the fact that she looked great. Here’s hoping the couple is far happier than Judy appears to be.