Mr. Rogers Used to Fart to Make His Wife Laugh at Boring Events 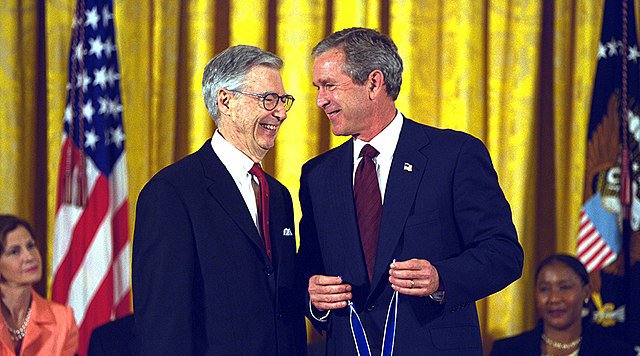 Fred Rogers is maybe the most wholesome figure in American history. Not only is he kind, genuine, and caring but he’s even more family-friendly than a jigsaw puzzle of the Eiffel Tower, if only because the Eiffel Tower puzzle could be construed as vaguely phallic, at least in comparison to Mr. Rogers, who is

Or so we thought. It turns out Mr. Rogers had a bit of a blue streak. In a recent interview with the Los Angeles Times, Joanne Rogers explained that because of her husband’s fame they were constantly being invited to events, galas, charity functions, and so on. Unfortunately some, if not a lot, of those events could be pretty boring. At the very least repetitive. (Mr. Rogers was a nice guy but he’s still a human being, he was capable of being by bored by people.)

So to break the boredom and liven up the mood Mr. Rogers decided to get a little raunchy. He’d let one rip.

“He would just raise one cheek and he would look at me and smile,” Joanne told the Los Angeles Times.

A couple of thoughts on this, quite frankly, glorious revelation:

1. Farts are universally hilarious. This is now undeniable.

2. I wonder if they were all silent. This clearly happened somewhat regularly. Mr. Rogers had to have let out at least a squeaker, if not more. Maybe something reverberated off a cheap metal chair he was sitting on. He probably didn’t even care. Who’s going to call out Mr. Rogers for farting? That’s nearly tantamount to accusing Jesus Christ of farting.

3. Even if he never let out of a loud fart, there is no way middle-aged or old-aged Fred Rogers didn’t let out a stinker. Yeah, he was a vegetarian, but he still ate cheese. You can’t tell me this guy didn’t have one too many cheddar cubes at some snoozefest charity event’s snack table and then unleash a cloud of hate at least once.