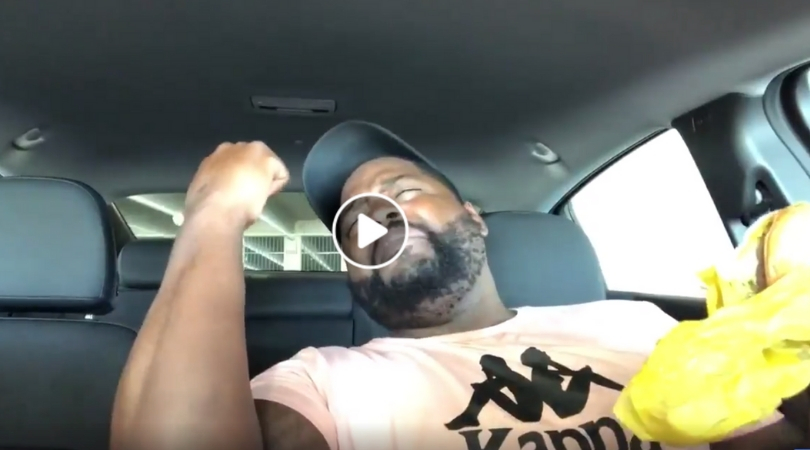 It’s no a secret that Texas is known for its all-time classic Lone Star favorites such as Blue Bell, Dr Pepper, and of course, Whataburger. For those of you who don’t know what Whataburger is, then sorry to say that you are truly missing out. The Texas fast-food chain first opened its restaurants in Corpus Christ in 1950. So yeah, it’s been around for quite a bit, and still going strong to this day. As of April 2017, there are 824 Whataburger stores across Texas. The chain has recently started to move around the US, with a location in New Mexico, Arizona, Arkansas, Louisiana, Mississippi, Alabama, Florida, and Oklahoma.

Falling into the Whataburger trap, a man from Florida decided to make a pit stop in Houston, Texas and filmed himself trying it for the first time to see if it was worth the hype. Well, let’s just say he is now considering moving to Texas, just for Whataburger. Can you blame him?

@whataburger is the best #burger in the #world not the state or country but the WORLD! Burger so good I’ll walk a thousands miles just to lick the wrapper😂😂😂😂😩 #whataburger #joshpray #humor

Josh Pray shared the video on Instagram and Facebook, and it’s pretty accurate to how all of us feel after taking our first bite. Whether it’s at 2 p.m. or 2 a.m. that bite takes you out of this world, seriously. Pray starts off the video by saying that he had heard a lot about the hype of the burger chain, but he can’t imagine a fast food burger being so different from others. So, comparing the wrapper to something being made in 1982 and annoyed from the ?over the top? comments of how good Whataburger is, the man quickly stops talking.

Shocked at the delicious taste, he quickly takes another bite “because the second bite tells you if it’s really good or not,” and looks for the ingredients on the back, ensuring there is cocaine on the burger. Which of course, there isn’t cocaine people…he’s just trying to show us how Whataburger is truly the American dream.

Comparing the delicious Whataburger to his mother’s cooking, Pray hilariously states, “If hamburgers are made in heaven, this is what Jesus is cooking on the grill. Whataburger don’t make hamburgers. They make statements. I’ve never eaten a piece of meat with bread, lettuce, pickles, tomatoes, and some cheese on it like that in my life. Whataburger making better food than my mama.”

The video has quickly gained more than 1.8 million views around social media, but I really hope his mom isn’t one of them because this man is going to be in trouble. I can reassure you that this is pretty much the reaction everyone has when they try Whataburger and they aren’t from Texas. I’ve had friends come and visit from out-of-state, and this is exactly what they feel.

So yeah, if you haven’t had Whataburger, then it’s time to make a trip to Matthew McConaughey’s state because this is where your dreams come true. I’m sure all Texans agree with Pray here. I just wish he would have tried the Honey Butter Chicken Biscuit because then he?d definitely move here in a second.

This article was originally published on June 11, 2019. We brought it back because we can’t get over this man’s hilarious reaction!

Watch: Made in Texas: This Road Trip Celebrates the Lifeblood of North Texas