As the year 2007 drew to a close, Brian Sacca relocated to Los Angeles to explore new opportunities as a performer and screenwriter after a decade of writing, producing and acting in his own skits and sketches in New York. There was just one problem: by the time he arrived in the City of Angels, the 2007–08 Writers Guild of America strike had already begun. “As I drove into town I learned that neither me nor my wife would have a job. So it was perfect timing!” he told Rare.

Despite severely limiting his options, the strike would only be a temporary obstacle, and Sacca was able to procure various TV writing credits. “I’d already been in the game for a while by that point so I knew what I was doing,” he confessed. Sacca began his comedy career as one half of the duo Pete and Brian, who achieved moderate success on YouTube in the early days of the platform. The pair wrote, produced and starred in their own viral hits, and Sacca believes it was this initiative that set him on the path to success. “When I left acting school I was doing plays that were horrible,” he told us. “And I started making my own content because I didn’t want to be at someone else’s creative will.”

As confident as he might sound, he’s also modest when it comes to describing his strengths and weaknesses: “I’m an actor who can be funny, but I’m not the funniest guy in the room. I’m not gonna say the line that’s gonna crush, but I’m going to help create the character that’s going to say the line that will crush.”

The writing jobs were easier for Sacca to come by than the acting ones, and he had just decided to lay his acting career to rest when he got an email from his agent that would change his life.

“It said ‘would you move to New York to be in a new movie called ‘The Wolf of Wall Street?’’ and I responded ‘is it a werewolf movie?’ and he said ‘no, it’s being directed by Martin Scorsese.’ So I was like ‘okay —  where do I go to audition?’”

Unsurprisingly, Sacca was excited by the prospect of working with Scorsese, who he describes as a “living legend of cinematic storytelling.” After a preliminary audition in L.A. he was asked to travel to New York to audition for the illustrious auteur. The meeting — as you’ll see if you look at Sacca’s filmography — was a success, and Sacca returned to New York City to spend five months learning from one of his idols and partying (on camera) with Leonardo DiCaprio and Jonah Hill.

RELATED: The next big thing: Mark Normand talks to Rare about political correctness, safe spaces and his friend Amy Schumer

“Every moment was an amazing moment with Scorsese,” Sacca told us. The enthusiasm in his voice as he relives some of his favorite moments from the shoot is palpable, and it’s clear that this particular chapter of his life shaped his career. “It was an incredible learning experience,” he said, before regaling us with the story of a semi-improvised scene that made it into the final cut of the film. “Myself and Leo and some of the other cast members are in a room and 12 blonde strippers and 12 brunette strippers burst in from either side and they clash in the middle and the whole thing descends into chaos,” he recalled. “One of the girls climbs on top of me and removes my belt and just starts whacking me around the face and slapping my chest with it repeatedly. So Marty goes ‘that’s great, we’ve gotta shoot that!’ So we did. “We did 10 more takes of a lady beating me with a belt as Leonardo DiCaprio looked on and laughed. It was pure chaos.”

Sacca’s role in “The Wolf of Wall Street” was far from minor, and the film’s success led to more exciting opportunities, like his role in the TBS comedy “Wrecked” — which is about to begin its second season. “I play a character called Danny Wallace who is — for lack of a better term — the chubby bearded guy on the show,” Sacca explained. “He’s a well-meaning idiot who lies to try and make himself look better but he always gets caught up in his lies. He’s desperate for friendship and forms a connection with one of the main characters, Owen, and will do anything to hold on that slither of a friendship that exists between them.”

Despite ostensibly being a sitcom, “Wrecked” — a show about a group of people who are stranded on an island after a plane crash — has predictably drawn comparisons between ABC’s convoluted drama series “Lost,” which ran for six years between 2006 – 2010, and was (somewhat ironically) drastically affected by the same writer’s strike that hindered Sacca’s initial settling in Los Angeles.

He’s more than happy to address the similarities between the two shows: “’Lost’ was a show about a bunch of capable people who are stranded on an island. ‘Wrecked’ is a show about a bunch of drunken idiots who are stranded on an island. There’s more truth to it,” he admitted. “As human beings we are all flawed idiots in one way or another so if  we’re stuck on an island we’re gonna miss certain things. We address all the important issues that ‘Lost’ didn’t really address. Like where people go to do their number twos!”

Sacca’s comparison is fair and accurate. “Wrecked” is certainly more than just a “Lost” rip-off. It toes the line between parody and homage but never takes itself too seriously — unlike the show it’s parodying. It’s a playful show that features an interesting cast of characters played by performers who clearly have a good ear for comedy, an opinion shared by Sacca. “We’re always making each other laugh. And we do a lot of improvising. Which [“Wrecked” showrunners] the Shipley brothers support,” he told us as he shared how enjoyable the show is to shoot.

But shooting a show that takes place on a deserted island isn’t always fun. “It’s hot,” Sacca admitted. “We shot the first season in Puerto Rico and the second season in Fiji and those are not cool places. We’re shooting in jungles where there are a lot of mosquitoes and on beaches where there are a lot of sand fleas,” he said, before venting his frustrations over his character’s fashion choices: “For some reason he decided to wear thick jeans and flannel shirts. Which really sucks for me,” he continued. “But I’m learning a lot of stuff. I learned that you can get sunburn on your eyeballs and I learned that because I got sunburn on my eyeballs!”

Sacca is understandably optimistic about the future. He has some exciting projects on the horizon, including an independent feature adaptation of one his scripts which is set in his hometown of Buffalo, NY. His advice for young upstarts trying to break into the entertainment industry is simple but profound: “Create your own content,” he said. “Even if it’s using your phone to make a video, if you think you have an idea that’s funny the only thing stopping you from making it is yourself because you can shoot anything. Find your voice and do what makes you laugh. That’s what I did.”

The second season of “Wrecked” premieres on Tuesday, June 20, with back-to-back episodes at 10 p.m. on TBS. 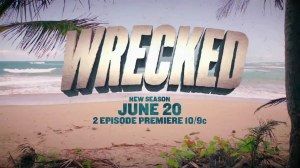