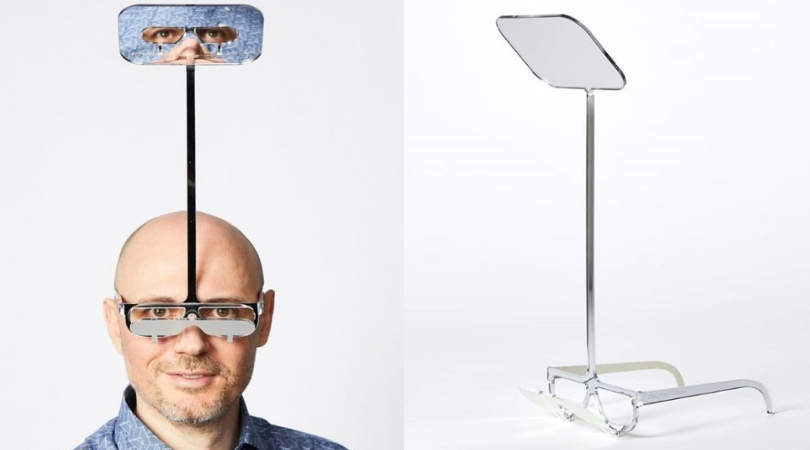 Many people are not happy when it comes to their height. For short people, we either hated or love it because it depends on the situation. For instance, I love being short, especially when it comes to amusement park rides, concerts, or cars where I can easily squeeze in because I’m 5’2. It’s an advantage if you think about it.

But some people really hate being short, because I guess you can say they don’t get the same amount of advantages that a tall person might get. Like going to the grocery store and being able to get a can of beans without jumping, still seeing the artist even if you are far away from the stage, and not being made fun of every five seconds by getting called shorty whenever friends tease you.

I was standing at a gig watching the music and turned round to see a small woman dancing away but with no chance of seeing the act. This gave me the idea to design and make these 'One Foot Taller' periscope glasses. They are made by cutting and bending one sheet of mirror acrylic which I think worked out well after lots of tries. Microsoft Surface challenged me to think up some extraordinary solutions to everyday problems so I came up with this and The Directing Jacket on the previous insta post. It was shown at the Extraordinary Solutions for Everyday Problems exhibition at Truman Brewery, London 21st to 23rd May. #extraordinarysolutions #createdonsurface #dandad @surface_UK #Design #Invention #glasses #spectacles #periscope #creativity #creative #gigs #music #style

Which is why Dominic Wilcox decided to put an end to it and help all of us shorties. What did he do? He invented a pair of glasses that will give short people a vital height advantage. Think of it as a pair of periscope glasses. The ‘One Foot Taller Glasses’ effectively add 12 inches to your height, turning you into a visible tower. Or just a freak with very very weird glasses. Still, props for thinking of us Wilcox.

This is a perfect product for a short person to use while, you know, trying to look over people ahead of them. As far as how he came up with the idea, he stated, “I was standing at a gig and turned to see a small woman dancing away but unable to see the band. This gave me the inspiration to design a way for people to see over obstacles such as tall people like me. It works well, though dancing with it on might be a challenge.”

It seems that my One Foot Taller periscope went a bit viral on websites and newspapers. I was on irish radio station News Talk today. Heres the drawing i did for it. #extraordinarysolutions #glasses #design #illustration #drawing

According to the inventor, the glasses are made from sheets of mirrored acrylic bent. The smaller mirror is position upward at a 45-degree angle towards a large mirror which then points outward. They were first shown at the Extraordinary Solutions to Everyday Problems exhibit, which is a D&AD festival in London.

He shared several photographs of his creation on his social media, showing how to exactly use them. Wilcox studied at London’s Royal College of Art, saying that although some people get thrills from bungee jumping or scoring a goal at Wembley, his thrill from coming up with these creative ideas.

Honestly, I really don’t know how I feel about these. I mean, if the whole point of you wanting to be taller is because you keep getting called nicknames and all that…this won’t help. I can’t be the only one who thinks these look pretty much ridiculous, right? Imagine going to the restroom and seeing someone washing their hands while wearing these! No, ma’am. That’s too much.

Time to invent another product, Wilcox. These magnifying glasses from Mighty Sight are already taken. And let’s be honest: short or tall, being able to see when your eyes go bad affects us all.

This article was originally published October 7, 2019.