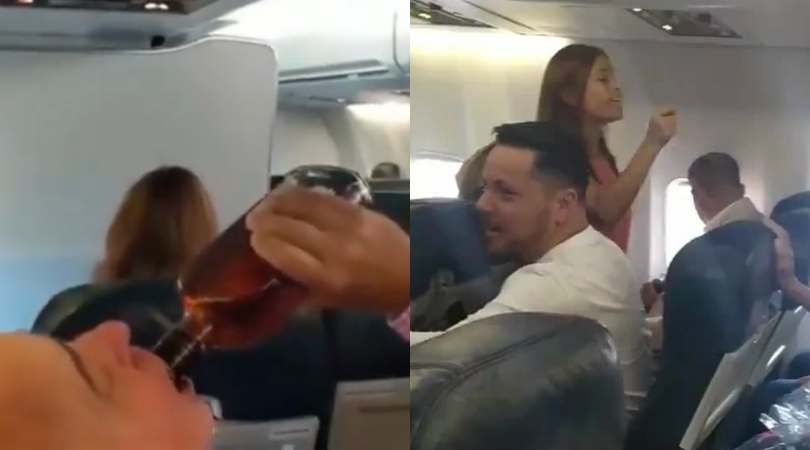 Question, what do you do when the pilot announces that they have to make an emergency landing because the engine isn’t working properly? Well, you chug some whiskey straight from the bottle and begin to pray because that’s pretty much all you can do, obviously. Which is exactly what all these passengers did. Can you blame them?

A flight from Caracas, Venezuela to Miami, Florida began to experience engine trouble and the plane was forced to make an emergency landing in the Dominican Republic. The pilot apparently noticed something was off half an hour into the flight to Miami, quickly returning to Santo Domingo where they originally departed from.

So, naturally, passengers took it upon themselves to film themselves passing around a bottle of whiskey, drinking it as they all prayed together while holding hands. Luckily the jet was fixed and took to the air once again, which made its final destination to Miami just a few hours later. No one was reportedly injured.

Safe to say it’s a good thing that no one was hurt during the flight, but I’m pretty sure there were more than one drunk passengers on board after that. I will say that it’s really funny to see all the different reactions in one video. Some stood up and recited a prayer while holding hands, some cried, some just looked up, and some just decided to rely on alcohol to save them by taking huge swigs. Because when you’re in a tense moment like that who doesn’t need a good shot straight from the whiskey bottle here in there.

Have you ever been so stressed that sometimes you just feel that chugging straight alcohol? We all do it. The video obviously went viral because it’s funny, especially since you don’t see people turning up inside an airplane very often. All they needed was some good music playing through the speakers.