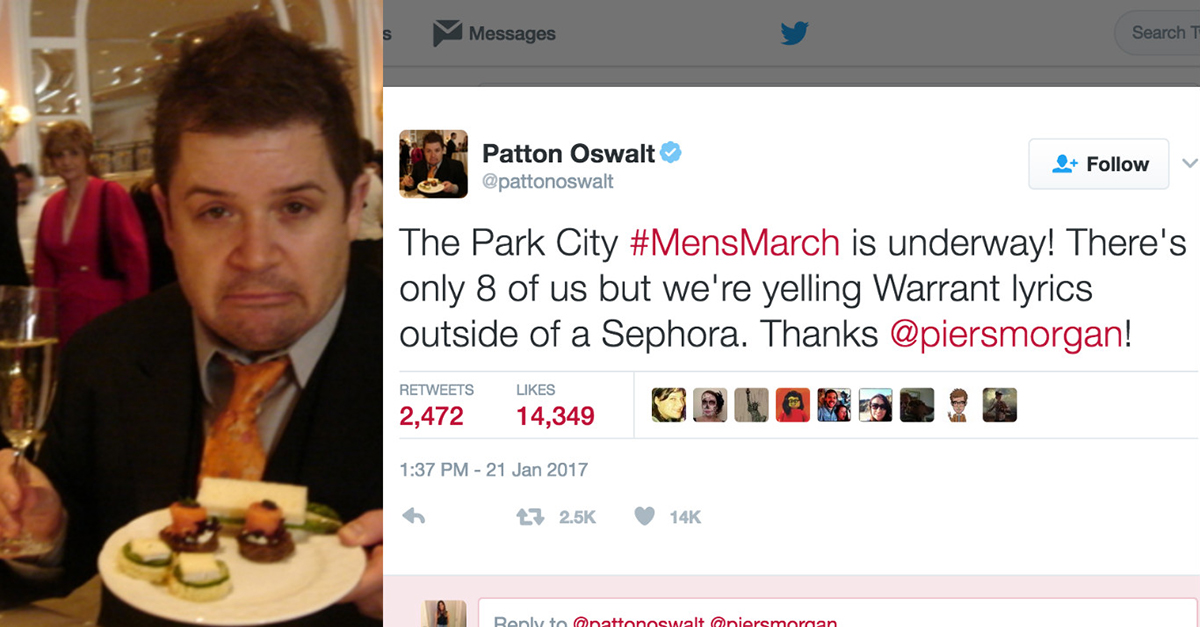 Piers Morgan has a lot of opinions. And much like his buddy President Trump, Morgan likes to voice those opinions on Twitter — usually eliciting a strong reaction from liberals. This weekend, Morgan tweeted about a topic he has come under fire for previously: feminism. Specifically, his tweets about Saturday’s Women’s March.

RELATED: Patton Oswalt has the perfect solution to your post-election day rage

First, Morgan voiced his discontent with the Women’s Marches happening across the country by sharing this tweet.

Imagine if there were a load of men-only marches today?
The feminists would go crackers.

The backlash was almost immediate, with many women calling him sexist and claiming that he was missing the entire point of the demonstration. But instead of recoiling from his unpopular position, Morgan doubled down.

I'm planning a 'Men's March' to protest at the creeping global emasculation of my gender by rabid feminists. Who's with me?

Not one to pass up the opportunity to troll a talking head, Patton Oswalt immediately jumped into the conversation, turning Morgan’s hypothetical “Men’s March” into a hilarious parody of itself. Oswalt even managed to get #MensMarch trending on Twitter, completely ironically of course!

Hey @piersmorgan, I'm at the #MensMarch. Am I at the right Arby's? No one's here. I'm in a "Bro-varies Not Ovaries" half-tee.

The Park City #MensMarch is underway! There's only 8 of us but we're yelling Warrant lyrics outside of a Sephora. Thanks @piersmorgan!

#MensMarch UPDATE: We've been infiltrated by a very confused James O'Keefe III who disguised himself as a DVD of THE LONGEST YARD.

Absolutely, sweetie. Do you need someone to come pick you up. You gals and cars, am I right? https://t.co/gdJqpg8qLK

Though he didn’t call out Oswalt by name, Morgan took to his Twitter again later in the day after #MensMarch became a real force of a hashtag, to clear the air. You see, according to Morgan, all these silly liberals didn’t even have the brains to understand that he was joking.

People actually thought I was genuinely planning a Men's anti-emasculation March. 😂😂
This is how dumb social media has become.

Well, Oswalt wasn’t going to accept that cop out.

Shut up you dumb British bullfart. No one thought you were gonna do shit about fuck. We just like making fun of you. Pip pip. https://t.co/XbzNhYy3cX