People Are Throwing Cheese At Babies, And We Can’t Stop Laughing at The Reactions! 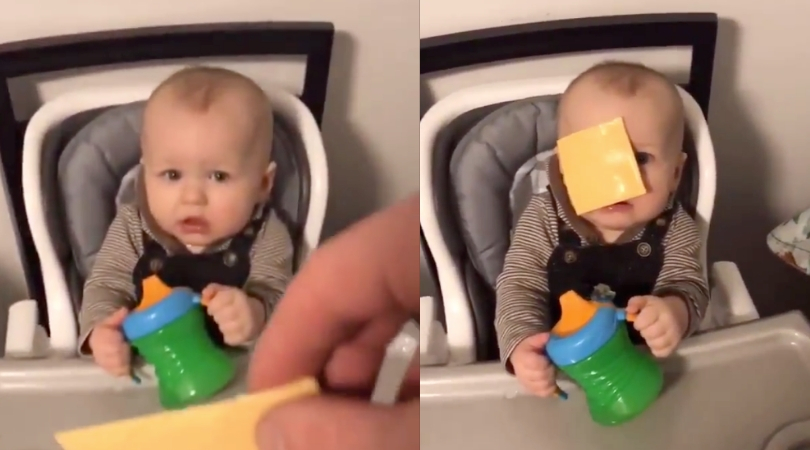 I really love the internet. You know how sometimes you scroll through your news feed and see something really really funny and it just makes your day? Well, this is that video. Apparently, people are using cheese to keep children entertained, but not how you think.

We’ve seen the Bird Box challenge, The Harlem Shake, the Kiki Challenge, and now we are introducing the Cheesing Challenge. Parents are cheesing their babies left and right, and it’ adorable and hilarious at the same time. Seriously, I have been laughing for 10 minutes straight.

Twitter user @unclehxlmes posted a hilarious viral video showing him holding a delicious American cheese. He then walks up to his baby brother sitting in a highchair and stops as the child looks at him up with these blue glossy eyes with a sippy cup in his hand.

The big brother then throws the cheese at the boy, hitting the kid in the face as he is left dumbfounded by what was happening. The cheese sticks to his head, and the boy can’t seem to process what just happened. It’s so cute and so hilarious.

I sent my mom a dm of somebody “cheesing” a kid. This is what I got back… pic.twitter.com/qHh2SoDKVW

Not surprisingly enough, the 6-second video went viral and has been viewed nearly 9 million times and gained more than 6000,000 likes. Now, to all of you trolls out there, I understand throwing something at a toddler isn’t fun obviously, but it’s just cheese. Simple cheese that he can probably take off and eat it by himself.

Several Twitter users are also participating in the challenge and throwing cheese not only on babies but on dogs. Users are flinging cheese on their backs, which is quite entertaining. Some dogs ignore the cheese and some immediately notice it scarfing it down quickly before their human takes it back. Some adorably try to reach for it, ultimately failing and wimper for help.

Be right back, choosing my cheesing victim asap.