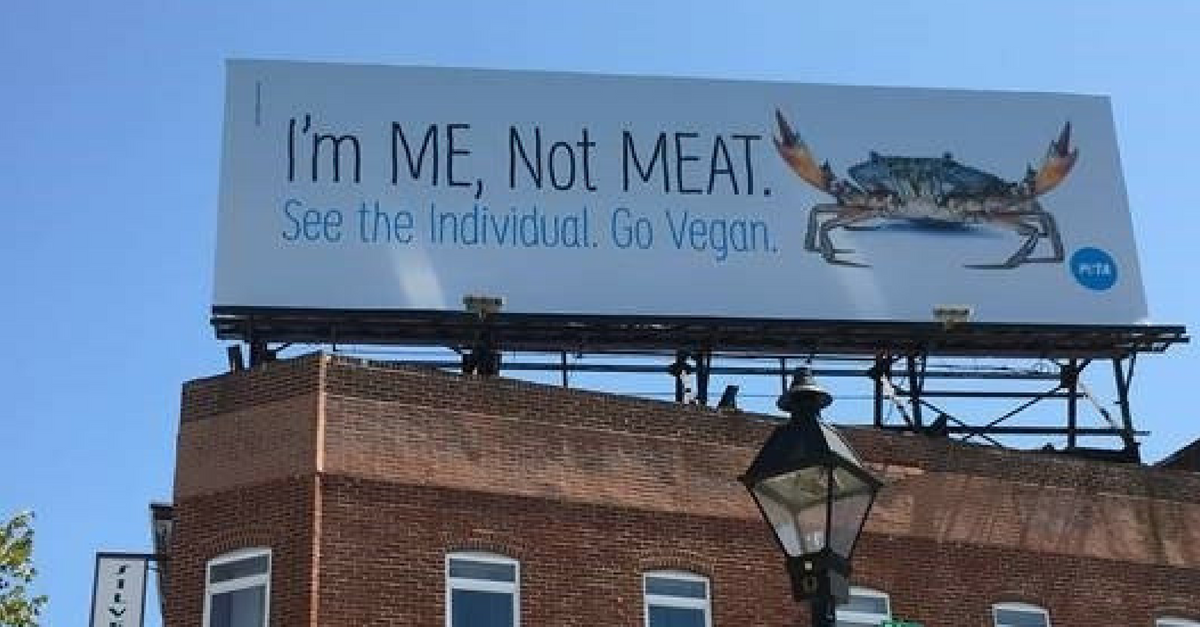 If you thought that the news about animal crackers being released from their cartoon cages was ridiculous, buckle up because this newest PETA billboard takes the cake. Before we get there, as I know you’ve read the title and see where I’m going with this, I’d like you to close your eyes and imagine the state of Maryland. Maybe your only point of reference is the movie Wedding Crashers, with its gorgeous views of St. Michaels on the Eastern Shore and this famous quote: “Crabcakes and football! That’s what Maryland does!” That’s enough for me.

See, I grew up in the Old Line State, and I don’t care if you think crabs are the bugs of the sea, they’re dang delicious. If you think it’s too much work to eat them, you were taught to eat crabs incorrectly. I can teach you how to crack that baby open and have all the meat in a pile in front of you in less than a minute. But I digress. We’re really here to talk about PETA, People for the Ethical Treatment of Animals.

So PETA won the animal cracker battle for cartoon animal welfare and it looks like they set their sights on Maryland’s favorite delicacy: blue crab. WBAL shared this photo from downtown Baltimore today on social media. Take a gander.

Convincing a Marylander to give up crabs is like asking a Mainer to give up Moxie, it just isn’t going to happen. WBAL reported that the billboard reads, “I’m ME, Not MEAT. See the Individual. Go Vegan.” Truthfully, the only individual things I’m seeing in that photo are those two delicious crab claws with what I know is quality meat inside, paired best with vinegar and Old Bay.

I don’t want to poke fun too hard. PETA serves an important purpose in the fight for animal rights, and while we might shrug our shoulders at their publicity stunts, they’ve played an integral role in better protecting the animals we share the planet with. And it is also true that, like land animals, crustaceans feel pain. Yes, live lobsters and live crabs know they’re being boiled to death and their nervous systems do respond.

The Executive Vice President of PETA, Tracy Reiman, told WBAL of the billboards,

“Just like humans, crabs feel pain and fear, have unique personalities, and value their own lives. PETA’s billboard aims to give Charm City residents some food for thought about sparing sensitive marine animals the agony of being boiled alive or crushed to death in fishing nets, simply by going vegan.”

The billboards are reported to remain in Charm City through September 15, or the Baltimore Seafood Festival. They’re also located right next to some of Baltimore’s most trafficked seafood restaurants, like Phillips Seafood, Mo’s Fisherman Wharf, and McCormick & Schmick’s Seafood & Steaks. Will they pop up at frequently trafficked Maine lobster restaurants though?

PETA just wants us to care more about animal cruelty, but I have a feeling that these billboards won’t convince many visiting Maryland to opt out of crabs. Whether it’s the fishing industry or the American kitchens where these crustaceans are cooked, PETA doesn’t ever shy away from bringing their message right to the consumers.

I’d never want to cause unnecessary pain to live animals and the thought of conscious lobsters and crabs not meeting an instantaneous death in the pot of boiling water does give me pause. Which, in the end, is what these billboards all are about. Animals experience pain, no matter the creature. That’s all PETA wants you to remember.

As for Marylanders, though, there are three things you never, ever say to one. Firstly, you never tell a Marylander that you have a better state flag (you don’t, Coloradans). You also never, ever mention Robert Irsay’s name and by that token, you never call Johnny Unitas an Indianapolis Colt. Finally, and mostly importantly, you never, ever insult crabs. And if my Mommom saw this billboard in her hometown, she’d ask just what the hell a vegan is, anyways.

Watch: Crew Gaines Is Lovin’ Life on the Farm