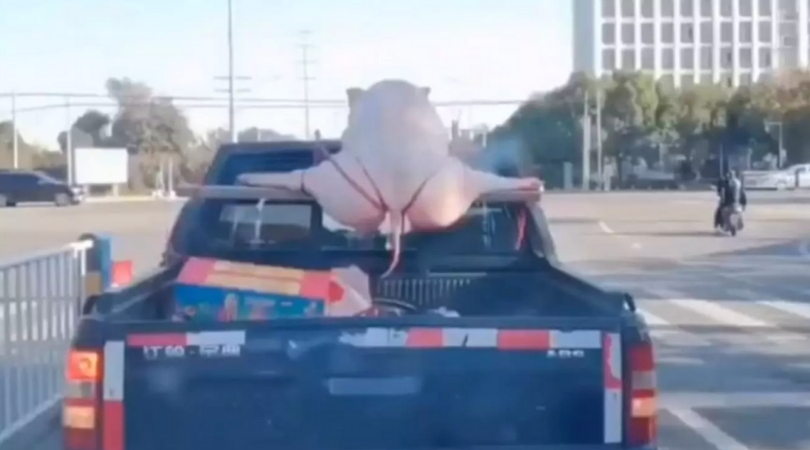 Hey Texans, I can’t be the only one who thinks Texas is such a strange place to live in, especially when it comes to driving down those long highways. Basically, people don’t know how to drive. It’s like they forget what blinkers are, and seem to forget speed limits when it’s raining. Then, you have your usual weird cars that drive around hang balls on the back of their pickup trucks, and people with stickers that make you question their sanity.

But this, this is all of those combined rolled into one. I am sobbing. Not because I’m sad, no, but because this is just too darn good. It’s hilarious, this pig looks like it’s ready to go to the strip club, and get those dollar bills he deserves. Because he worked hard for it, damn it!

Okay kidding, jokes aside, no this pig isn’t alive. It’s dead, and he is being transported to an engagement party where he will probably be devoured. Still, it shocked quite a lot of motorists in the City of Fuyang in the Anhui Province of China, because well, that’s probably not the best way to transport a pig carcass.

The poor fella was tied to the roof of a pickup truck by a rope, with its two hind legs support by a wooden board that was attached to the back of the vehicle. Yes, this poor pig had a makeshift g-string using the red string in broad daylight.

According to the driver of the pickup truck, the pig was an engagement gift for his son’s fiancee. It was placed on the roof because his future daughter-in-laws’ family thought it would “look nicer than putting it inside the car.” Yup, sure, that’s such a good excuse.

This gives a whole new definition to the phrase "hogtied".😆😆😆

Obviously getting in trouble with the Beijing Police Department, the truck was quickly stopped since the bizarre transportation exceeded the maximum height restriction for vehicles out on the road. So, the police department shared the video on social media to warn other drivers to not break the road safety regulations. And thank god did, because this is definitely a must-see.

Hey drivers…maybe don’t do this? Unless you want to give people a heart attack. Also…I wonder what this driver was seeing every time he turned his head around to make sure the pig was still there.