Police Accidentally Get Everyone High After Burning 3 Tons of Marijuana 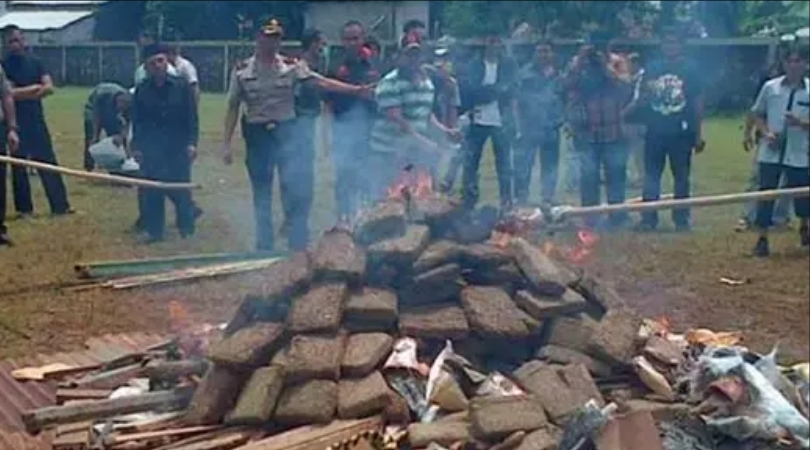 Sometimes we don’t think things through, and that’s perfectly normal. But this incident, this is just too much. Someone needs to fire (and erase, delete, expel, everything rolled up into one) the person who came up with this dumb, yet hilarious idea.

Turns out Police in West Jakarta in Indonesia got people insanely high when they tried to burn three tons of marijuana! Not only were they burning cannabis, oh no, the fire included 2538 ecstasy pills and 2 pounds of crystal meth! Why? To destroy the illegal imports in a fire.

According to reports, the police officers anticipate that the fumes created by the burning drugs would be potent and powerful, and were prepared by wearing gas masks. But, it seems like they forgot to inform locals in the surrounding area, and a number of people complained saying they suffered from dizziness, headaches, and reportedly felt completely high.

I’m sorry…but WHAT? In what mind did they think this was a good idea? Safe to say everyone got a fix of what it feels like to be beyond the level of high without even know what was going on. Can you imagine those poor people? This is how I think every conversation went.

“Hey, do you smell something?”
“Yeah, smells a little funky. Is there a skunk in here?”
“Yeah, we should call pest control?”
“Yo…are you hungry? We should check out that new ramen place.”
“Oh yeah, ramen sounds great right now! With dumplings.”
“Mmm…yeah, dumplings.”
“With Sriracha, a lot of sriracha.”
“Then later we can go buy some Doritos, because of Doritos with dumplings. FIRE!”
“Wait, I think I need a nap. Can we sleep first?”
“Yeah, naps are good. I’m gonna go lie down”
“Let’s just order a pizza.”
“Pineapple and sausage please.”

Watch: Carrie Underwood Gets Pulled Over by Police