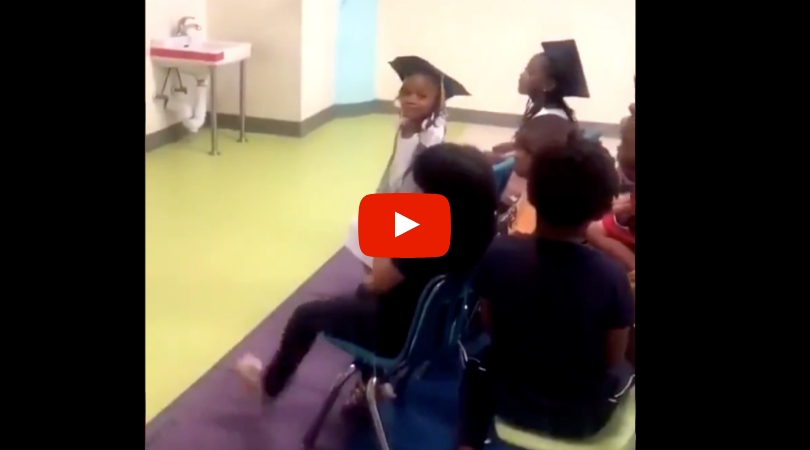 Teachers aren’t paid enough to do their job, we all know this. There are way too many kids out there who don’t give a penny about them, and unfortunately, they can’t do anything about it but pull their hair out while hiding in the bathroom. I’m telling you from experience here. I used to teach children aged 2 to 18 during the summer, and those terrible rascals were something else. So yeah, safe to say I lost a few hairs here and there and decided not to teach anymore, because duh.

So when I saw this trending video, courtesy of my coworker Richard (who you should check out his hilarious stuff here) I knew I had to write something on it because it is too darn good. All this preschooler wanted was to get out of the classroom pronto, and well, he succeeded. It’s pure internet gold, I tell ya.

During his preschool graduation ceremony, at least that’s what it looks like, the kid literally yells at his teacher to “shut the fuck up” right as she starts the ceremony. Not having it one bit, the little boy proceeds to yell, “No, Bitch” when she asks if he needs to leave the room. Yes, “NO, BITCH.” Someone come get your kid because he is about to get a whooping from this lady. Truthfully, I don’t know how she didn’t just come up and smack him in the face.

Why This Lil Boy Treat This Lady Like That😭😭😭😭😭😭😭😭😭😭 pic.twitter.com/tdJmOmyRyQ

Yeah, yeah, there are real life serious consequences and laws that might send you to jail for that. But heck, if I was that boy’s mother, I would be on the teacher side and give her a high-five. Honestly, I would just throw everything on the floor and just leave the room and school right then and there. This kid gave ZERO fucks. You know this kid is going to be the trouble maker all through his school years. For sure heading into Kindergarten as the hero and the coolest kid around.

Hey parents, you might want to stop telling your kid to shut up, because then he’ll do this kind of crap. Your kid just went viral for the funniest and embarrassing thing a 4-year-old can do. Also…by the way that man grabbed the kid by the arm, you KNOW there is some major smack down involved. That kid flew in the air!

Editor’s note: This article was originally published on June 18, 2019.