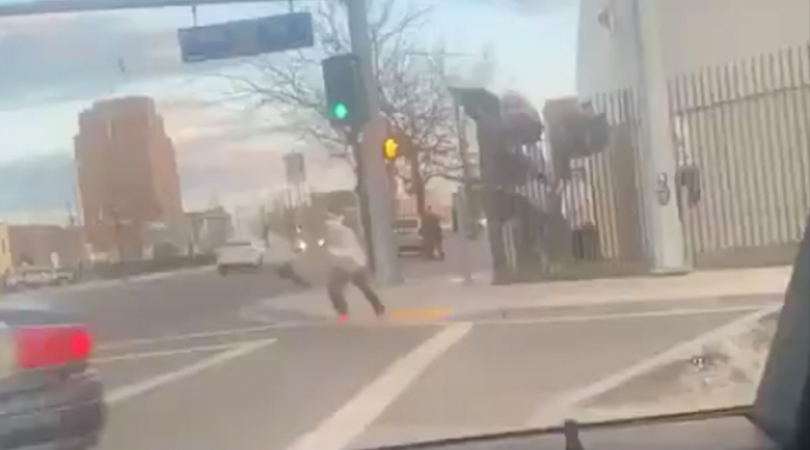 Six inmates are at large after a mass escape from a county jail in Yakima, Washington. According to authorities, the prisoners escaped by ramming open a fire door with a table. From there the prisoners scaled the jail’s outer fence and scattered.

A motorist who happened to be driving by the jail when the breakout occurred caught the escape on video. Several prisoners are seen hopping the fence and running like the wind in every direction.

The Yakima County Department of Corrections says they captured six of the prisoners that escaped right away, but another six got away and are still at large.

Yakima County Sheriff Robert Udell said in a Facebook video that the men had a little more motivation than usual to attempt the escape because they were, in all likelihood, worried about Coronavirus after Washington Governor Jay Inslee issued a stay-at-home proclamation on Monday.

Police noted that the escaped inmates would likely be wearing a t-shirt with YCDOC stenciled on them, as well as green sweatpants and orange flip flops.

INFORMATION: The majority of escaped inmates were last seen wearing the below clothing. Possibly Barefoot or wearing orange sandals. Call 911 if you see anything suspicious. pic.twitter.com/4zO4h2Z9EV

1. Watching these guys escape, like the guy filming did, would be hilarious for the first fifteen seconds but as soon as they started running toward me I’d probably pee my pants and slam on the gas. One of the last things I ever want to see running toward me is a desperate, escaped convict.

2. The guy who ran right past the car may very well be a violent criminal but it’s hard not to feel for him just a little bit. Poor bastard, with adrenaline pumping through his veins, chugging as hard as he can in flip flops but looking like he’s running in mud.

3. These prisoners might well have genuinely been afraid of contracting Coronavirus and getting crappy treatment for it because they’re in prison, but if they didn’t… that’s still a great defense for if/when they get caught.

“Uh yeah, your honor, I only escaped because I was afraid for my health in these crazy times. I definitely wasn’t just itching for some meth and some sex with my girlfriend who has a tattoo of two skeletons doing it on her back.”