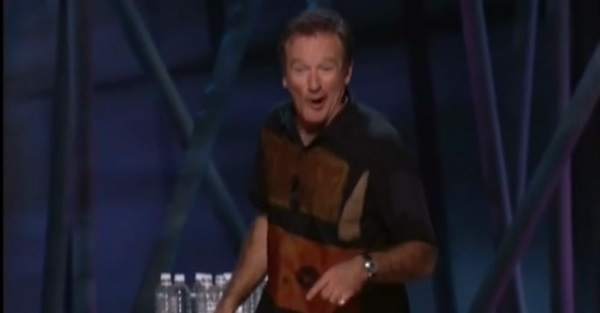 A lot of people enjoy golf. However, Robin Williams points out one thing about golf that probably everyone can agree with: in a vacuum, golf is stupid, and the people that invented it had to be drunk while making the rules for this game.

This comes to us from Williams’s “Live on Broadway” stand-up in 2002 and it might be one of his best known bits of comedy. Williams starts — after insulting the Scots — by bluntly explaining the game of golf.

RELATED: When Robin Williams dropped this joke about Michael Jackson, the whole crowd lost it

“Here’s my idea for a fucking sport: I knock a ball in a gopher hole.”

“And I put the hole hundreds of yards away!”
“Oh, you mean like a bowling lane?”

“Fuck no! Not straight, and I put shit in the way!”

RELATED: Two years before he died, Robin Williams appeared with Louis C.K. in one of his most brilliant roles

This keeps building to the ultimate climax of the bit, which is really where some people can find the game of golf to be completely absurd.

Brilliant. Hopefully we can still lobby for his goal of getting a soccer announcer on the U.S. Open or something, because the sheer entertainment value there would be unbearable.