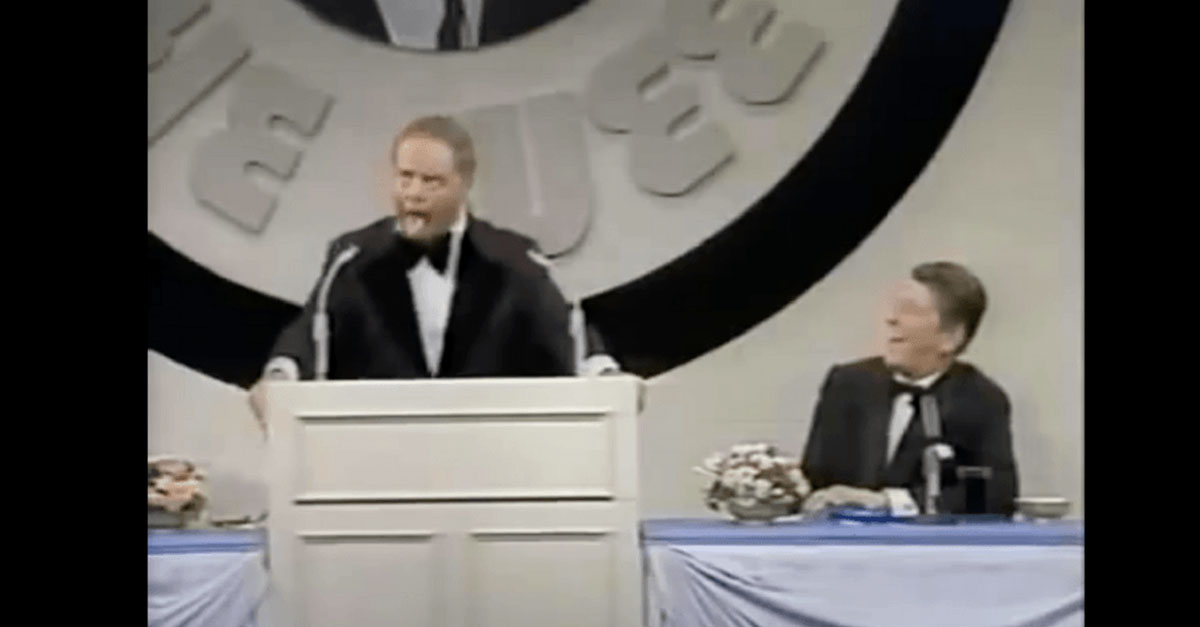 In 1973, then-Governor Ronald Reagan was the subject of the Dean Martin celebrity roast. As a Governor and an actor, Reagan wasn’t the average target of one of these roasts. However, the future President had a great sense of humor and was able to laugh at himself. And to watch comedian Don Rickles roast Ronald Reagan is not something you get to see often with any other presidents every day.

Don Rickles was perhaps the most aggressive and the funniest of the performers that night, but that was his charm. He didn’t give anyone a free pass on the insults, never needing a blooper reel, including the Governor as the man of the hour. Even though according to Rickles, it was the first time he met then-Governor Reagan, Mr. Warmth didn’t care.

“The governor is the greatest politician of all time; he laughs at everything. ‘My brother died!’” Rickles joked while pretending to laugh as Reagan.

The jokes and insults started up immediately, and Reagan seemed to be the person laughing the most! Reagan wasn’t sensitive. He could take a joke and knew it was all in good fun!

That was an era when people didn’t take themselves too seriously. They could take a joke, even ones that pushed the envelope. They didn’t worry about hurting feelings as that was the entire point of a roast! People could laugh at themselves back then, and that even included Ronald Reagan! This wasn’t the only time Reagan was on the receiving end of Mr. Warmth’s jokes. In 1985, Don Rickles also performed at President Reagan’s 2nd Inaugural.

He didn’t hold back with the insults, especially on Hollywood and other celebrities. He joked about Billy Graham as the audience roared with laughter! He even insulted child actor Webster. His routine certainly would have been considered offensive by today’s politically correct standards. But this crowd loved it!

Don Rickles will always be a legendary insult comic. Appearing not only on the tv show, the Dean Martin Show, he was also on the Tonight Show Starring Johnny Carson. You can also watch how Don Rickles roasts Frank Sinatra and how Foster Brooks roasts Don Rickles himself.

Editor’s note: This article was originally published on February 18, 2019.