Man’s Roomba ‘Cleans’ Up His Dog’s Poop, Proceeds to Spread it All Over House 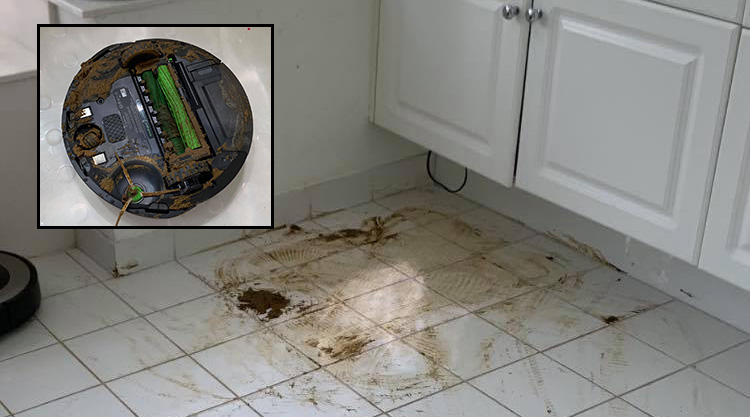 The Facebook post from Ryan Landy, of Ryan Landy Films (follow him in Instagram here), about his nightmare Roomba scenario went viral and for good reason. It is as hilarious as it is horrifying.

Essentially the story is that Landy’s dog pooped in the house and the Roomba attempted to clean it, failed horribly, and spread Landy’s dog’s business from one end of the house to the other.

This is every clean freak’s worst nightmare. You leave your spotless house in the morning and come home in the evening to find, in the most literal possible terms, dog shit spread all over everything. They’d rather come home to a naked clown than that.

Everything about this makes me want to throw up in my mouth just a little bit. The idea of what it must have smelled like when he got home, having to clean it up yourself pretty much immediately after finding it, but most of all what that Roomba looks like flipped over. That is pure evil. And there’s so much of it! Does this guy own a Great Dane? No pug is pushing out that much hate, that’s for sure. There’s no keeping that Roomba after this. It is so unclean that it cannot ever hope to be able to clean anything else ever again. You have to throw it out. Throw it into a dumpster and then toss a Molotov cocktail into the dumpster and hope that it burns hotter than the sun.

Robots might take over and destroy humanity one day, but right now they’re still accidentally eating poop like a one-year-old eats spaghetti so… we’ve got some time.