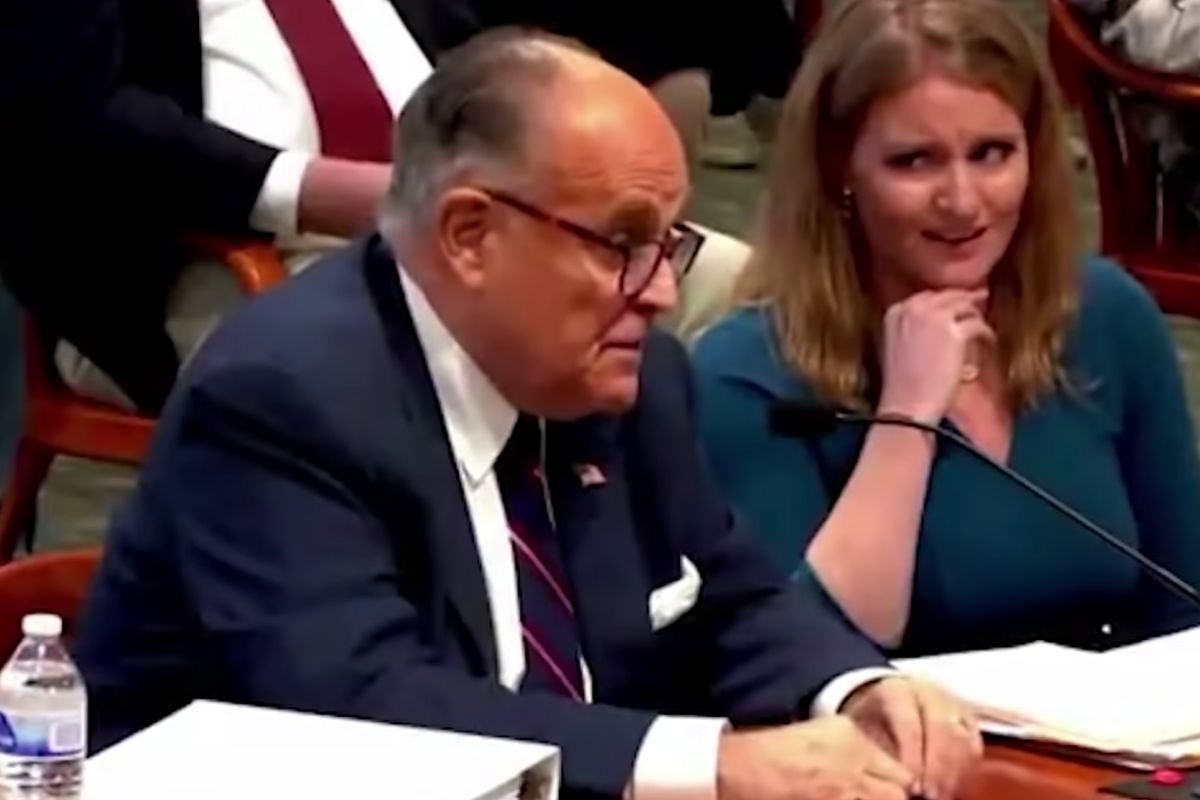 “Odor in the Court!” is what one tweet said, as a reaction to two unmistakable fart sounds heard during “the chaotic and conspiracy-filled” hearing held in Lansing, Michigan, last Wednesday over election fraud accusations concerning the 2020 presidential election.

“Odor in the Court!” Tweeted by Monica Broussard (@paulrj1)

This now-famous Giuliani fart is just the cherry on top to the other embarrassing times lawyer Rudy Giuliani has appeared all over the media within the last few months. First, there were concerns about his incredibly sketchy appearance in Borat’s sequel movie, Borat Subsequent Moviefilm, with a seemingly underage girl (played by an of-age actress of course!).

Then, there was the incident at the Four Seasons Total Landscaping Company, where Giuliani held a press conference in Philadelphia, Pennsylvania, claiming Biden’s victory was due to voter fraud with no evidence. The joke was that this baseless press conference was held near a sex shop, a crematorium, and a jail, and the landscaping company made some extra money off of merch with sayings such as “Make America Rake Again,” and “Lawn and Order.”

And most recently, during yet another press conference horror story, but this time in Washington, D.C., at the Republican National Committee Headquarters, a bead of what looked like black hair dye was streaming down the side of Giuliani’s face with no explanations as to what it actually was and only conspiracies as to why that would happen.

But now, as the entire media world usually blows up over happenings like this, it has once again, as not just one, but two farts were heard during the Michigan hearing.

Michigan State Representative Darrin Camilleri asked about a New York Times Story that claimed that Giuliani was lobbying President Donald Trump for a preemptive pardon, in which Giuliani got a little riled up, objecting immediately in saying that that question, “was a defamatory question.”

As he said, “I will ask that he be disciplined for that,” the microphone picked up a faint tooting sound. But that wasn’t the end of all the farting.

Less than a couple minutes later, lawmaker Camilleri continued to press Giuliani for a response to “Attorney General Bill Barr’s statement that federal prosecutors had found no evidence of election fraud that would overturn President-elect Joe Biden’s win,” another sudden fart noise was heard once again when Giuliani responded.

“The answer that I gave you was that they didn’t bother to interview a single witness,” Giuliani said as another, but louder and more sudden toot slipped out. There was truly no denying that the fart was heard as his assisting attorney Jenna Ellis, sitting right next to him, immediately reacted, unable to hide her face at the sudden, possibly smelly surprise.

His flatulence was simply not going to be overlooked, as HuffPost reporter Ryan J. Reilly called Trump’s campaign’s lawyer out on social media via Twitter. The video has since been viewed over three million times. I will say, you have to applaud Giuliani’s ability to continue and react as if nothing happened.

Rudy Giuliani did not like @darrincamilleri’s line of questioning! pic.twitter.com/Eitw2czinu

Hey, we’re all adults here okay? The human body just gets older and frailer, and I bet it gets more difficult to control your gastro-intestinal systems. I mean, I’m no doctor, but it’s not like politicians aren’t human enough to not have to deal with the body’s normal processes. Joe Biden and Eric Swalwell have also been victims to their own farting. But that also doesn’t mean we can’t giggle a little bit about it.