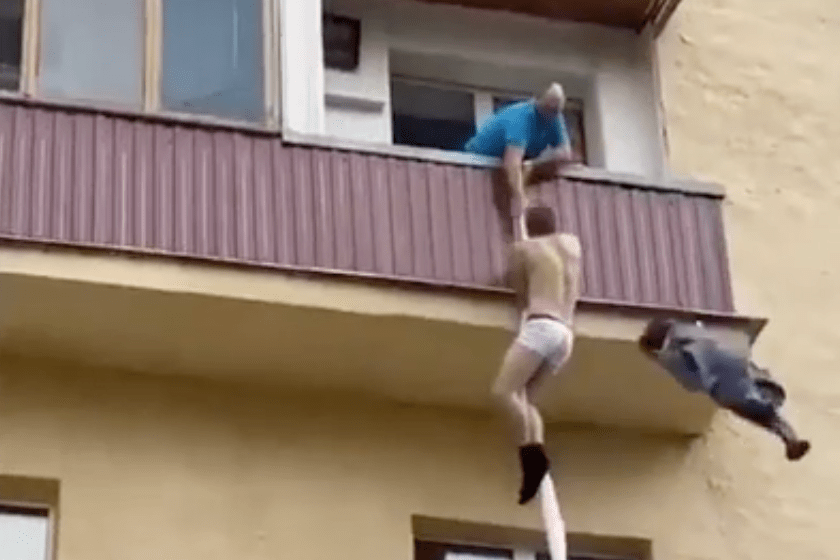 A Russian man was seen climbing out of an apartment balcony on tied together bedsheets after the husband of the woman he was fooling around with came home and caught the pair. Naturally everything was filmed by passersby and posted to social media.

The manstress can be seen climbing down the bedsheets in nothing but his underwear as the wife throws his clothes over the balcony for him to collect on the ground. The enraged husband, meanwhile, is seen attempting to get at the man while the wife holds him back.

Just another day in Russia. from PublicFreakout

To be honest, the first observation here is that the husband seemed pretty reasonable considering what some people do when a man catches wife cheating. It’s a miracle he didn’t grab a knife and cut the bedsheets while the guy putting it to his wife was dangling in mid-air. He wouldn’t be the first person to throw someone out of a window for having sex with his future ex-wife.

The highlight of this video, by far, however, has nothing to do with this love triangle. It’s all about the most Russian looking old lady ever conceived whacking the guy with a broom. She’s like a living cartoon.

There aren’t many details about the video aside from what we see in it, though several Reddit users do contest that it’s a fake. Why would they have bedsheets ready-made to use for climbing?

As always, I choose to believe in the magic of the moment. To belive that these two are so dumb that they thought banging with a high chance of the husband coming home was a good idea, and that the best escape plan was to tie bedsheets together like they were in some 1950s comedy.

Whatever. Funny either way.