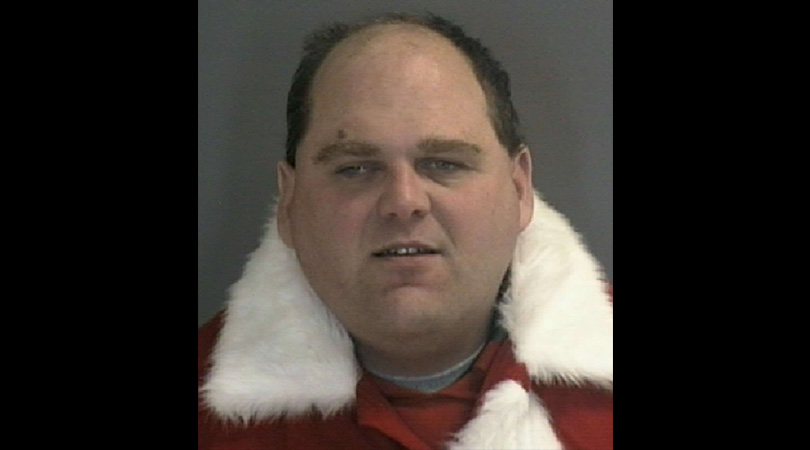 Don’t worry kids, the real Santa Claus wasn’t soaked in peppermint schnapps and trolling street corners for squeezers behind Mrs. Claus’s back. He would never. But a Salvation Army Santa? Oh yeah.

Edward J. Agrusti of Colonie, New York was in full Santa attire and ringing his bell outside a Price Chopper supermarket in Latham, New York when a police officer, who was at the store for a different matter, recognized the Santa. Because he had a warrant out for his arrest. For patronizing a prostitute in January 2018. (Blowing off some steam after a tough Christmas season, no doubt.)

Agrusti was cuffed and taken downtown dressed as Santa where he was issued an appearance ticket. Then the cops drove him back to the Price Chopper and apparently Agrusti went on ringing his bell-like it was a normal day.

1. I would pay money to watch a Santa Claus get cuffed in public and hauled into a squad car in person.

2. Does Colonie, New York employ the most eagle-eyed cop in the country? How could this officer have possibly recognized Agrusti, especially if he was wearing a beard or hat? Even without the full Santa garnish, Agrusti is just some random guy. Was this cop lol’ing at the hooker warrants with his police buddies the other day and then by chance came across Agrusti while he was popping into Price Chopper?

There has got to be more to this story. Like the motel Agrusti was going to take that hooker back to, this stinks.

3. Agrusti was arrested on Christmas Eve, in public, and dressed like Santa, so there’s a good chance there was at least one little kid who saw all of this go down and had a panic attack that there weren’t any presents coming this year. There was probably some serious hate for the police brewing inside that little kid until those presents showed up the next morning.