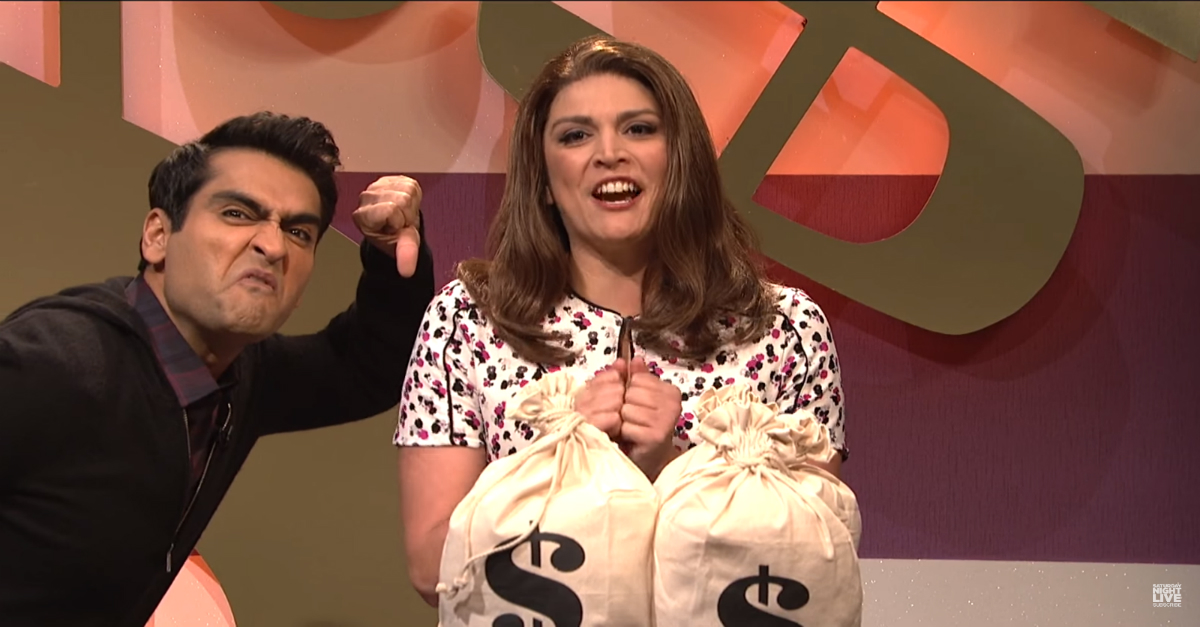 Nanjiani plays Paul, just your normal, everyday dude who is trying to win some big money. Feeling the excitement of being on a tv game show, he playfully starts talking major trash to his competing rival, Gretchen, played by Strong. Paul goes on and on about how he just wants to win a ton of money and buy a new wardrobe full of new “jackets and jeans,” only to realize very quickly that he and Gretchen compete on Bank Breakers for very different reasons.

Paul’s conscience starts to show when Gretchen reveals why she’s playing for big money. When she explains that she’s trying to win money for her daughter’s surgery, Paul starts have a change of heart, quickly deflecting with how he will also donate some of his “jackets and jeans” to a charity he clearly made up on the spot called “Cars for Kids.” But Gretchen’s reasons don’t end there.

Soon, she revels that she’s also a veteran, and that her house was recently robbed. Paul, who seemingly can’t catch a break in making himself not look like a total asshole, tries his best to give her a chance to win, only to keep digging himself into a deeper hole. He chooses topics he doesn’t know anything about and tries to give her the questions he thinks she’ll answer correctly, only for him to keep winning more money.

Eventually, the camera cuts to the contestants’ supporters in the crowd, only for things to get worse for Paul, who’s honestly really trying at this point. The audience meets Gretchen’s family first, consisting of her husband Josh, played by Alex Moffatt, and a little girl who is her daughter, both wearing “Go Mommy” t-shirts. But the hilarious part is when the camera moves over one spot next to Gretchen’s daughter to Paul’s roommate Pat who’s supporting him, played by Pete Davidson. And what is he wearing? A t-shirt that says “Loser” with an arrow point right at Gretchen’s daughter. Classic.

Paul watches in horror as the ending of the show, signified by a fictional bank robber, played by Beck Bennett, taking one contestant’s money and giving it all to the winner, happens when the bank robber takes Gretchen’s money and gives it all to him.

Editor’s note: This article was originally published on October 15, 2017.

Watch: ?Saturday Night Live? Shows Just How Hard it is to Be a ?Girl at a Bar?